Dynamite! The History of the Dynamite Works at Hayle, a story cafe by Peter Channon.

Join us at Hayle Rugby Club on Wednesday 8th Sept at 6.30pm for a talk about the History of the Dynamite Works at Hayle (Upton Towans).

This is also a briefing for a dynamite walk to see the remains on site on Thursday 16th September at 2.30pm

We will be looking at the history of the location leading up to its part in the production of cordite for WW1, and how many local women had to undertake the hazardous production tasks. Dynamite was the modern replacement for gunpowder and is still in use today. Dynamite was a by product of nitro glycerine which was an extremely dangerous product to manufacture and use. The fact that a Cornish based company decided to set up a brand new facility on the Hayle Towans was a brave move as they had to design and build it from scratch, and also make it safe to operate.

The use of dynamite made mining far more productive and had many advantages over the former gunpowder which it eventually replaced. The Great War saw a need for military cordite and Hayle went on to produce this product until the plant closed in 1919.

Peter’s interest in dynamite started when he worked underground at South Crofty Mine, and his interest in aerial photography started as a hobby when he started flying. The hobby tuned into several decades of commercial flying, which also included aerial photography. Requests for talks followed and cover several subjects including Cornwalls historic past, and an in depth coverage of the Battle of Britain. The dynamite talk involves Peter’s own experience of use plus the history of production in Hayle with the added inclusion of his aerial views of the location.

A guided walk to accompany this talk will take place on Thursday 16th September at 2.30pm

Bookings for the guided walk will be taken on the evening of the talk. 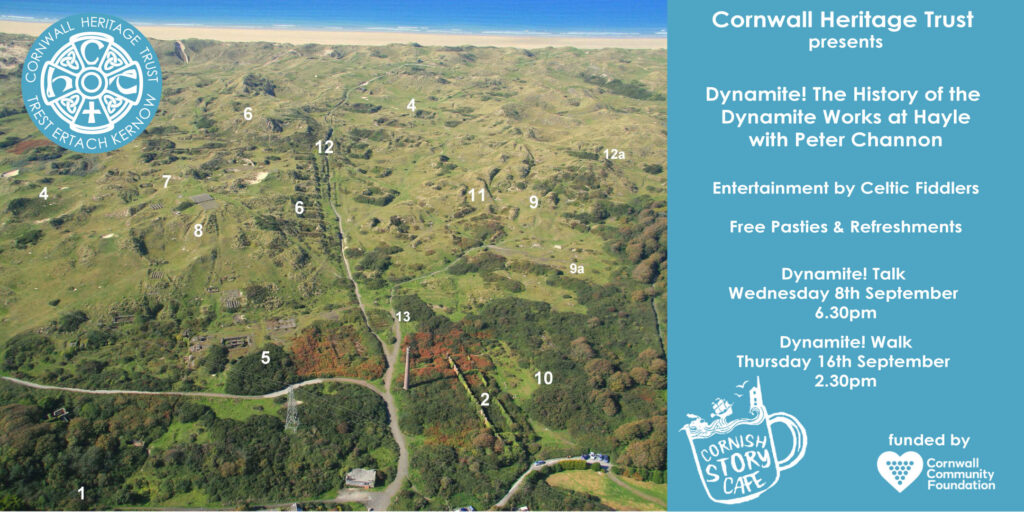