Cornwall Heritage Trust was proud to help fund this award-winning play, written by Ed Rowe to mark the centenary of the end of World War One. Directed by Simon Harvey and co produced by o-region and Palores.

HIRETH
(Cornish, a longing for home)

Across the channel, a Great war rages.

When the British Army arrive with an unexpected offer, Harry and his friends swap the dirty, dark and dangerous tunnels of Geevor for the deadly underground warzone beneath the Western front.

‘You battle everyday with nature. You fight to drag minerals from the ground. You’re already fighters. You’re already warriors. Its time for you to lend those skills to the war effort’.

This epic new production tells the untold story of Cornwall’s forgotten war heroes and the unique impact they had on the First World War. 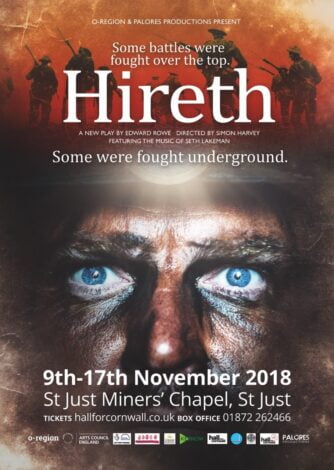