Delayed slightly by the very wet weather leading to an overflow into the aqueduct, the investigatory works at Treffry Viaduct have now commenced. 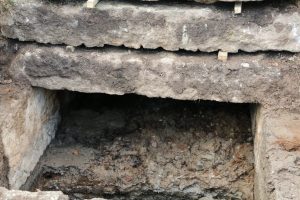 The tramway has been opened up in two places along the length of the viaduct, with three granite sleepers lifted in each section; work is now starting on a third location.  The sleepers are enormous with one weighing in excess of two tonnes!  The work is undoubtedly hindered by the recent wet weather and the aqueduct channel is currently holding water in the places where the silt has been removed.  The silt was between 300-400mm thick and has to be removed in order to access the bedstones, pumps are also being used to remove the standing water. 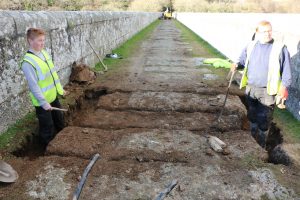 Interestingly, the bedstones at the North West end have been lifted previously and work undertaken to lay cement in the joints between the stones.  The other two locations are considered to be fresh-lifted, however the middle site also seems to have had the joints cemented which came as a surprise.  If the third location shows signs of the same work it may be assumed that work took place in the last 60 years to renovate the joints along the length of the channel.  The channel itself is approximately 1.1 metre deep. 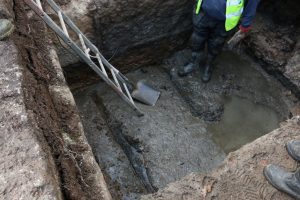 The next step is to undertake core drilling on the NW end and investigate the structure beneath the bedstones further with the use of a borescope.

Access to the viaduct itself remains closed for the duration of the works however the footpaths throughout the valley are open as usual.