“Here are fifteen of the favourite stories which Cornish people have for centuries regarded as their chief fireside entertainment. Varied in mood, and presenting a wide range of personages, these tales bear comparison with the best fairy stories and legends anywhere. In the tradition of the droll tellers of former centuries, we here offer a taste of the rich store of well-loved tales as collected by Victorian and Edwardian antiquaries.”

DONALD R. RAWE was a Cornish bard, well-known for his plays and writings on Cornish themes. He was born in Padstow, where his family has lived for over 200 years. Among his books are ‘A Prospect of Cornwall’, ‘Cornish Hauntings and Happenings’ and ‘Padstow’s May Day Festivities’; his plays include ‘Petroc of Cornwall’, ‘Hawker of Morwenstow’, ‘Murder at Bohelland’, and ‘The Last Voyage of Alfred Wallis’.

MORGELYN (Mary Mills) was also a Bard of Gorseth Kernow, being widely admired for her distinctive line drawings on Cornish subjects. This new edition of Traditional Cornish Stores and Rhymes is dedicated to her memory, with respect and affection.

Copyright reserved. No part of this book may be reproduced by any mechanical or electronic means without prior permission from the author or publishers. 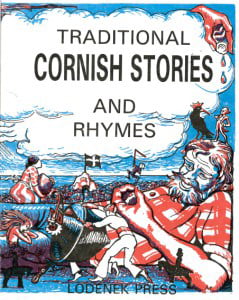 Since first publishing this volume in 1972, the revival of interest in Cornish folklore has continued steadily, partly due to the popularity of the book itself. Especially in the field of drama, these and other stories have taken their hold. There have been memorable productions of plays on the Treagle theme by the Foots Barn Players and Knee High Theatre; Shiva, Bedlam and Kernow Productions, among other companies, have contributed to the movement, as we may certainly call it, by writing and performing on themes including the Giants of West Cornwall, various Mermaids, Saints Merlasek, Petroc and Piran, and King Geraint. School drama productions based upon Cornish folklore are on the increase, even in these days of the national Curriculum; and story telling itself has revived at events such as the annual Lowender Peran Festival and the Triennial Cornish Esethvos (Eisteddfod).

All this is particularly heartening, since when I myself was a child, although we were introduced quickly enough to the fairy tales of Anderson and Grimm, there was hardly a story told from our own rich Cornish tradition; and yet these tales and legends have been assiduously collected by Robert Hunt (1865-77) , M.A. Courtney (1890), J.H. Harris (1906), Enys Tregarthen (1906-10) and others. To those ‘gatherers of fragments, that they be not lost’, we owe an incalculable debt.

This new edition will, I hope, introduce further generations of parents and children to this unique heritage, and will be followed, it is hoped, by similar volumes.