Cornwall was once the favourite dwelling place of giants; they were especially fond of the Land’s End and Mount’s Bay districts. In fact the Mount, now called after St.Michael, was actually built (so we are told by the old writers) by a famous giant called Cormoran, a man as big as a mine-stack, but extremely lazy. To tell the truth, most of the work on the Mount was done by his wife Cormelian, a woman as tall as a cliff and strong as twenty horses, but who was bullied by her husband into slaving for him.

Cormoran and Cormelian built the Mount using granite rocks of square or cubical shape, which they found some distance inland on the moors of Penwith. Now the old name in Cornish for St. Michael’s Mount is Carrek Los yn Cos: the Grey Rock in the Wood; and in the time of the giants the Mount was actually six miles inland, in the midst of a thick forest of elms and beech and birch trees.

All the other giants in Cornwall lived on their own hills; Cormoran’s idea was to build a great mountain out of the granite, so that he could see as far and wide as they could, and keep watch from it. But after several weeks of hard work fetching and carrying the stone, and laying it properly to fit, he became less keen about it all, and took to sleeping long spells after his mid-day meal. He would eat several barrels of pilchards, or a whole cow or ox, or a couple of sheep, if he could grab them from some luckless farmer without going too far to do it; and after these heavy meals he would lie there snoring like thunder and whistling like a hurricane, and expect Cormelian to traipse to and from the moors with the tremendous blocks of stone in her apron – a great leather garment made out of the hides of ten bulls.

One day Cormelian herself was feeling rather tired, and also annoyed with her husband for lying there in the shady trees whilst she worked. Near the woods was a large mass of greenstone, and she saw no reason why she shouldn’t use this instead of the granite, and save herself a long trudge. So breaking of a great lump she took it up in her apron, and treading quietly so as not to wake Cormoran, carried it across to the half-built Mount.

She was only a short way from it when a seagull flew down and perched on the end of Cormoran’s nose. The giant stirred and sneezed; then, waking up, he saw Cormelian carrying the wrong kind of stone, and let out a bellow that could be heard as far away as St.Agnes. He got up, ran up behind her, and gave her a colossal kick that sent her sprawling. Her apron-strings broke and the huge greenstone fell into soft grounds, half embedding itself there.

So it has remained through the ages, long after Cormoran and Cormelian and the rest of the giants died out. The land sank and the sea rushed in over the forest, though even today you can sometimes see tree trunks and branches in the sands of Mount’s Bay. The great greenstone rock lies half-way between St. Michael’s Mount and the shore, and on it some 500 years ago a chapel was built where a hermit would tend a light or ring a bell, warning sailors not to come too close for fear of being wrecked. 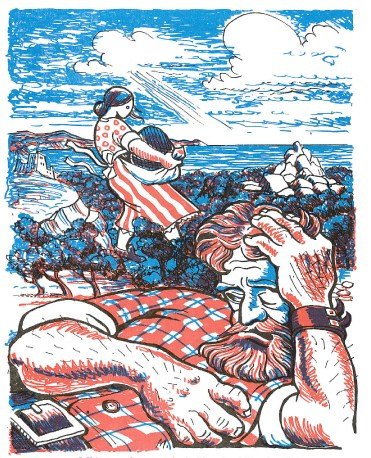