At Chyannor in St. Levan parish lived a man called Jowan (pronounced ‘Ewan’) and his wife Kekezza. Jowan was a tinner, but the bal he worked at nearby went scat and closed. So sadly he said goodbye to his dear wife for a long time, and set out to find work elsewhere. He went east and walked for several days.

He was taken in by a wise old farmer near Callington, who agreed to keep him for a year employed on all kinds of jobs on the farm, and to pay him three gold pieces as wages at the end of the year. When the year was up the farmer said, “Here are your three pieces of gold, Jowan, but if you let me have them back again I will give you a piece of valuable advice that will serve you well in the future.” Jowan thought hard, but knowing that work was still scarce in his own district, he decided to accept the offer. “Here is the money, master,” he said. “Now what is your advice?”

“Hearken well,’ said the farmer. “Never leave an old road for a new one.”

Jowan then agreed to work a second year on the farm, for another three gold pieces; and at the year’s end the farmer offered him his money, but again suggested that Jowan hand it back for another piece of advice. Jowan agreed; this time the old farmer’s advice was, “Never lodge in a house where an old man lives with a young wife.”

They agreed for a further year, after which the farmer offered Jowan the three gold pieces, but said, “If you give me back the money I will give you my best advice yet.”

“Very well, master,” said Jowan. “I only hope it stands me in good stead; at least I have learned how to farm.” The farmer took the money and said, “Think twice before striking once.” Now Jowan would not serve the farmer any longer, wishing to go home to his wife. “Before you leave,” said the master, “my wife has something for you to take home with you.” And the farmer’s wife gave Jowan a cake she had just baked, saying to him, “Promise me not to eat any of it until you get home to your wife.”

Jowan promised this and said farewell. On his way home he met three merchants from Treryn in his own parish, who were travelling back from Exeter. They were glad of his company; but coming to a new road which the merchants said was a short cut, Jowan left them, remembering the farmer’s advice for which he had paid so much. So he followed the old road through Chywoon; but he could hear the merchants not far off, being set upon by highwaymen. Jowan shouted out, “Thieves! Robbers! Help, help!” so loudly that the thieves ran off and the merchants were unharmed.

They arrived at Marazion, and the grateful merchants wanted Jowan to stay at the inn with them; but Jowan first insisted on seeing the host and hostess at the place. He found that the host was an old man, growing feeble, and his wife was young and comely. “Thank you,” said Jowan, “but I will go next door and lodge there.”

That night when he was going to bed, Jowan heard a muttering from the room of the inn next door, and saw a light shining through a hole in the wall between. A monk was there, plotting with the inn-keeper’s wife to murder the old man and lay the blame on the merchants; and Jowan heard what they said. Then the monk put his back to the hole in the wall so that nobody should see the woman killing the old man as he lay sleeping in bed. But Jowan took his dagger and through the hole in the wall cut a piece of cloth out of the monk’s habit.

The next morning the hostess of the inn accused the merchants of murdering her husband, and the three of them were taken before a judge and were condemned to hang. But Jowan told the judge his story, and to prove it showed him the piece of cloth; which fitted exactly the hole in the monk’s habit. So the judge released the merchants, and ordered that the woman and monk should be hanged instead.

Jowan at length arrived home at Chyannor. It was nightfall, and he wondered whether his dear Kekezza had been true to him for the past three years. So he listened at the door, without knocking; and from the bedroom above he heard her talking to someone in loving terms. “Of course I do love ‘ee my beauty, more than anybody in the world,” he heard her say. Quite convinced that she had a lover, Jowan was about to rush in and kill them both with his dagger; but he remembered the wise old farmer’s advice: ‘Think twice before striking once.’ So he knocked on the door.

When Kekezza opened it she was overjoyed at his return; and Jowan found to his relief and delight that the ‘man’ she had been talking to was their own little son who had been born soon after his departure.

“What money have ‘ee brought back, then, Jowan?” asked his wife then; and she was bitterly disappointed to find he had no money, only a stale cake from the farmer’s wife. “I don’t want your mouldy old cake!’ she cried in anger, throwing it down. At this the cake broke open and from it rolled nine gold pieces which Jowan had earned; for the good farmer and his wife had put them in the cake as a just reward for his loyal service.

Jowan never had to leave home again. The three merchants whose lives he had twice saved gave him ten gold pieces, and with the other nine this gave him enough money to set himself upon a small farm, where he and his family lived happily all their days. 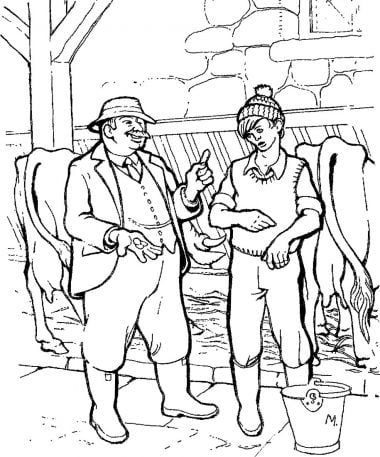