They have been there for centuries, longer than anyone can tell: two little stone men sitting on stone horses, on the roof of what used to be an old inn in Padstow. The grave writers of history books tell us that they were put up to tell people in the old days that a change of horses could be had there. But a legend handed down through the mists of time says that at certain times of the year, when the church clock strikes twelve midnight, the little horsemen and their steeds come alive, descent to the Market Place, and gallop through the town.

The last person to see them do this was young Budock Curgenven, the sailmaker’s son. (Budock is pronounced ‘Biddick’) When he ws a small boy his grandma told him about the little horsemen, and from then on it ws Budock’s dearest wish to see them riding. Often he would try to stay up late, hoping to hear the clock sound twelve, but his Mam and Dad always ordered him off to bed long before. Once or twice, walking in the dead of night, he crept to his bedroom window and peered out through the curtains, for the house they lived in was just across the Market from one where the horsemen sat like statues on the roof: but it was either too dark or the wrong time, and he had to go back to bed disappointed. When he talked about them his Dad laughed and said the story was nonsense – “Just old women’s whiddle – an idle tale” – he called it. So Budock stopped talking about the horsemen; but he never forgot them.

One winter’s night when he was nine years old, his Mam and Dad were invited to a New Year’s Eve party at a big house on the Quay. When it was quite late they decided to go, leaving Budock asleep in the house. “He do sleep so sound as a bell,” said his Mam. “But we’ll be back in an hour or two, in any case.”

They had been gone more than an hour when Budock suddenly woke up. Something told him this it was a special night; perhaps it was all the talk he had heard about the New Year that would be born that night. He tiptoed across the room and peeped out at the little horsemen; but there they were in the cold moonlight, still sitting motionless on the roof. He was about to go back to bed when he heard the church clock striking. He counted the numbers and held his breath: nine…ten….twelve! And suddenly the horsemen were gone from the roof.

Not even stopping to put on a coat he ran downstairs, and tried to open the heavy door. But his Dad had locked it. He found a window that opened, and climbed out; it was a long way to the ground, but he was agile and landed softly on his bare feet. As he stood there blinking he heard the sound of tiny hoof-beats: he ran round the corner and, sure enough, galloping away up the hill towards the church, were the horsemen. They spurred their mounts and even whipped them; they seemed to be in a terrific hurry. Budock ran after them in his pyjamas, but though he was a fast runner they got father and farther ahead of him.

Just as he stopped, thinking he would have to give up the chase, he heard the hoof-beats returning. As if turned to stone himself he stood there on the corner, as they came into view galloping full tilt down the hill again. As they turned the corner the first tiny horse, no higher than Budock’s knee, shied and whinnied at seeing him; but the horseman looked up at Budock and laughed, spurring the animal on, and down the long steep street they raced.

When Budock arrived back at the Market Place all was quiet and still, except for the sounds of merrymaking coming from the party at the house on the Quay. Budock looked up at the old inn roof, and there, frozen and stony in the moonlight as if nothing at all had happened, were the horsemen again. Now very cold and weary, Budock tried to get into his home, but of course the door was locked, and the window was much too high for him to climb up to it. Not knowing what else to do, he curled up on the doormat in the corner of the porch and went to sleep.

There his Mam and Dad found him when they came home, and carried him up to bed. He tried to tell them about the horses, but they only laughed. Budock cried a little to think they wouldn’t believe him, but he soon went off into a deep sleep. And next morning, as if the horsemen wanted everybody to know for sure it was true, he found in the street outside his own house a tiny whip no longer than his hand’s span.

He kept the whip all his life, and no one could ever deny his story or say it was only a dream. 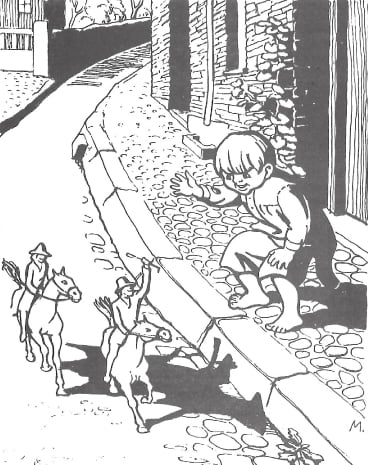