One fine Sunday morning in Zennor church, perched on the cliffs of Penwith, the choir and congregation were ready for service when through the church door came a strange lady of unearthly beauty.  Her green eyes looked back calmly at the villagers, who were staring, for newcomers were rare in that far-flung parish; her tawny-gold hair flowed down over her back, wild and untrained; the long dress she wore swept the ground like a bride’s train, and was made of some material that no one there had ever seen, for it shimmered like the sea on a sunny day.  She sat near the door in a pew on her own, away from other people.

In the choir were some fine singers, but none finer than Mathy Trewhella, a handsome young man who sang a clear high tenor:  his voice could be heard all over Zennor Churchtown when he wished.  As the choristers sang their hymns and psalms Mathy became aware of the stranger staring at him with those emerald-green mysterious eyes; when he looked at her it seemed to him that a queer faint smile hovered on her face.  After the service she was the first to leave the church, and those who went out after her thought it strange how rapidly she had disappeared, as they could not see her anywhere outside.

Five or six times this unknown lady came to Zennor church, always on a fine day, and always she sat far apart from the congregation, watching Mathy and listening to every note he sang.  Her eyes seemed to look right through him, and her gaze somehow reminded him of the dim light in caves under sea.  He determined that somehow he would find out who she was.

The next time she appeared in church he was ready.  Before the end of the service, as the parson gave the benediction, Mathy slipped from the choir stalls and let himself out of the little side door of the church.  And so, as soon as the lady emerged, first as usual from the main door, he was at her side.  She smiled as if she had been expected him, and took his arm; and thus they left the churchyard together.  People coming after them saw them take the winding path that led down the valley towards the sea.

That was the last Zennor saw of Mathy Trewhella.  His old mother was heartbroken for a long time, but at least she had other grown children to comfort her.  The story of how Mathy disappeared with the stranger was a great mystery, often talked about, and unsolved for many years; in fact two generations had been born and grew up in the village, and old Mrs Trehwella was in her grave before news came of him.

A ship bound for Penzance, and captained by a man who knew Zennor well, came by one day and anchored off Pendower Cove; she put out a boat to get some water from the shore.  Soon a woman’s voice was heard calling urgently, “Ship!  Ship ahoy!” and the watch, looking overboard, saw a mermaid with green eyes and tawny-gold hair swimming beside them.  “Tell your captain to haul up your anchor,” she cried.  “For ‘tis lodged against the door of my home on the sea-bed, and I can’t get in to my Mathy and children.”

At this the captain came to the side and questioned her.  “Excuse me, ma’am, but did you say your Mathy?  Mathy who, may I ask?”  Sailors are always very respectful to mermaids, who have powers to cause shipwrecks and disaster, and often use them if they are annoyed.

“Mathy Trewhella, my husband, of course,” she said.  “Now haul away, if you please.”  The captain did not stay to argue, but brought up the anchor immediately.  And with a swish from her long gleaming tail she was gone, diving down to the sea-bed and her family.

So Zennor heard the news, and learned Mathy’s fate.  Neither he nor the mermaid has ever been since, but in Zennor church now is a bench end carved to show what she looked like:  long flowing hair, a sea-siren’s face, and a curved scaly tail.  And for all we know, Mathy is still down there on the ocean floor, singing sweetly to his mermaid wife and their children. 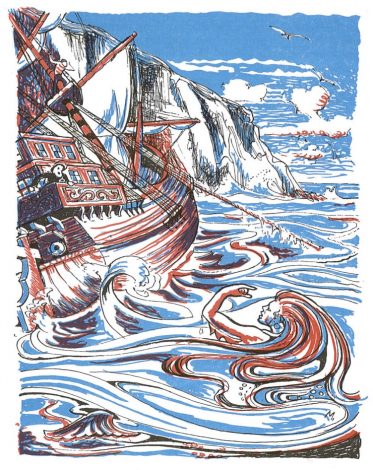