Peder Prynne was the brightest child in his class at school, and usually the best behaved. If his teacher had any trouble with him at all it was because now and then she would catch him day-dreaming in class; and she would wonder what he was thinking about, staring before him with bright innocent eyes as if he could see all the past and the future too.

At home he said his prayers morning and night, and ran errands for his mother; for he had no father. He would go in and chop firewood for old Aunty Betsy Tresize next door. He was very fond of flowers, and often went out to pick his Mam a bunch of wild campion, cuckoo flower, or butter’n eggs, according to the season.

One fine day in May after school he wandered further than usual from his home in St Allen parish, and near the edge of a wood where the bluebells were nodding and swaying, he suddenly became aware of an eerie plaintive sound. It sounded like hundreds of small voices singing wordlessly, and seemed to come from inside the wood. He felt he must go in to find out what was making the sound.

As he went in through the trees the music faded before him, drawing him on; then it became stronger, and he heard tiny bells and fluting pipes as well. The wood grew thicker and darker about him, and he would have turned back, but the music suddenly took such a beautiful wild turn that he was irresistibly drawn on.

And so he vanished, and was not seen for three weeks. His mother and her neighbours looked everywhere; the parson and the policeman were called in, but could not help. As far as anyone in the village could tell, Peder had simply vanished. His poor mother had very nearly given up hope of ever seeing him again, when up came Jan Buller, a farmer who lived two or three miles off, with Peder in his cart, as healthy and well-cared for as ever in his life. He had discovered the boy fast asleep on a soft bed of ferns.

“My dear life and soul, wherever have ‘ee been all this time, my lovebird?” exclaimed his mother when she had recovered from the first shock of seeing him again.

“Tis all right, Mam dear,” said Peder gravely. “I’ve been with the piskies, that’s all, and they’ve looked after me very well.”

Then he told his mother, and the friends and neighbours who crowded round, of his journey into the fairy realm. Inside the wood, with the music leading him on, he had been taken to a shimmering lake, beside which a tall fair lady in rich robes was standing; then he saw all around him the merry piskies who, invisible to him until then, had been leading him. The lady was most kind to him, and took him through mossy grottoes and along streams full of rainbow-coloured fish to a gorgeous place of gold and silver, hung with crystals bigger than any the men of St.Allen had ever seen in the mines. He was fed on the magic food of the little people, more delicious than anything he had tasted at home, and found he could eat as much as he wanted without every feeling too full.

All this Peder told with such compelling detail, looking so straight and honestly into the eyes of his hearers, that they found it impossible to doubt him. Afterwards they often wondered why he and no one else had been chosen to enter the piskies’ world.

Perhaps his school-teacher understood best why; for many years afterwards she remarked to the parson that only those who are pure in mind and soul, and also gifted with second sight (that is, the power to see and hear supernatural things) ever receive kindnesses from the little people. 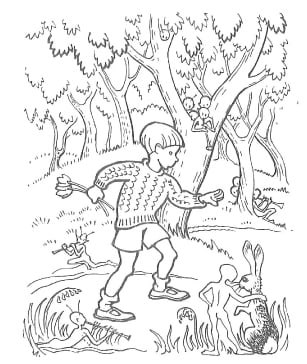