Piskies are of several sorts, some kind and some mischievous; and some are both at various times. Many people used to believe that they are really the souls of children who dies before they could be baptised, and so they live in their own world here on earth instead of going up to heaven or below to the underworld; perhaps that accounts for their innocent and impish ways. This is the story of a pisky who, at least for a time, was helpful and did a farmer a very good turn.

Hicka Tregilgas had a small farm near Looe. He didn’t earn much money from it, only just enough to live on and sometimes a little besides. He had no wife, only a mother who was getting so old she could do very little about the house; so Hicka had to look after himself, and get his meals as well as do the work on the farm.

One year the large field of corn which Hicka had sown ripened in a bountiful crop, with thousands of ears full of good golden grain. Hicka had never had such a crop before; but his problem now was how to get the harvest in and thrashed in time to get it to market. Nobody else around him could help; they were all either hard at work on their own harvest; or out fishing – for the old saying :

When corn is in the shock, The fish are on the rock

was true that year, though very little help to Hicka. So he set to work cutting the corn himself, and bound it into sheaves as he went; it took him several days to do this, and it was the hardest work he ever did in his life. In a day ir two it would be market day, when, if he could only get his grain to Liskeard, he would get the best price for being first at market. “But however can I get it all thrashed in time by Friday?” he said to himself, standing amid the last few sheaves he had bound. “Today is Wednesday, and I haven’t even started to thrash it.”

He carried all the corn to his barn that evening, but he was so tired all he could do was fall into bed and sleep. And he slept so late the next morning that when he was it was nearly noon.

“Rum Fey, I’ve been and overslept myself, and ’tis so late that I shall never get that thrashing done!” he cried, jumping out of bed. But when he reached his barn he saw with amazement that a good quantity of the corn had actually been thrashed, and even put into bags ready for market. Hicka could hardly get over this, but he set to work and thrashed as much himself as he could, relieved that at least he would have some corn to take to market the next day.

That evening he went to bed very late, and was weary again; but this time something woke him up during the night. It was the sound of the dreshel, or flail. He crept downstairs in his nightshirt and peeped in through the barn door, and there he saw a pisky in a tattered suit of green; the little fellow was threshing the corn with tremendous vigour, singing to himself all the time the merriest and most tuneful pisky songs, The pile of grain grew before the farmer’s eyes, and soon nearly all the sheaves had been thrashed.   It was nearly dawn now; the pisky scooped up the corn into bags, dusted himself off and flew away out of the window.

Hicka went back to the farmhouse and made himself and his old mother some breakfast, for he had to leave as early as he could to get to market. He was wondering all the while how he could thank the pisky for his services. Soon he had an idea.

He stacked up his dray with the bags of grain, and stared out for Liskeard. He was one of the first to arrive there, and got an excellent price for his crop. With the money in his pocket he wandered about the town just as the shops were opening up for the day.   He found a good tailor, and said to him, “I’ll give you three golden crowns if you can make him a suit of the finest green cloth, to fit someone this high, and so broad, by the evening.”

The tailor was delighted with this price, and began to make the suit immediately. That night before Hicka went to bed he laid out the new suit of green in the barn, near the dreshel. There were still some sheaves left to be threshed; and Hicka this time stayed up late, until he heard the dreshel going in the barn.

He crept to look; as he peered in around the door the flail stopped, for the pisky had finished threshing all the corn. Hicka saw him putting on the new suit, and looking down at himself admiringly. Then the little man cut a few capers, giggled to himself and then sang:

“Pisky fine and pisky gay – Pisky now shall fly away”.

Out of the window he went, into the night; and that was the last Hicka ever saw of him. 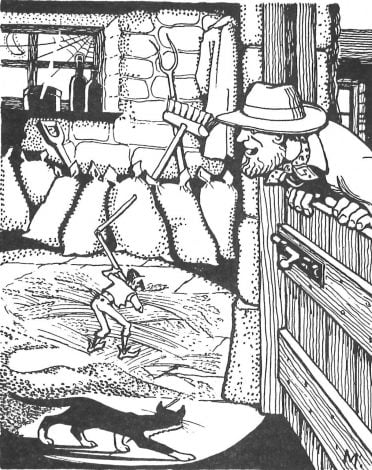