One bright calm moolit night on Trevose Head, where a large dark pisky-ring showed up on the turf, about six hundred piskies were dancing and laughint in a circle.  Round and round they danced, faster and faster as the Fiddler in the middle sawed away on his tiny violin. One little fat pisky named Omfra laughed so much that he began to choke; soon he had to stop, shaking and spluttering.  The others smacked him on the back, but it didn’t help; there he was, stuck between a laugh and a cough, and turning blue in the face.

Finally they got hold of him, turned him upside down and shook him hard.  At this he both laughted and coughed at the same time, a great explosion that blew all his friends head over heels backwards, and made the Fiddler stop playing.  When Omfra got his breath back his face grew long and solumn.  “Come along, Omfra! On witht he dance!”  they all cried, and the Fiddler struck up again.  Night owls and seals and a great heron came and watched as they went round and round in a whirling circle agin.  Then some of them noticed that Omfra was no longer dancing but sitting morosely on a stone, his head in his hands.

“What’s wrong, Omfra?  Why aren’t you dancing?” they cried to him.

“Come on, join in and you’ll feel better,” said one of his particular friends.  He and another pisky pinched and tickled him, giggling and thinking it great fun; but Omfra looked more gloomy than ever, and snapped at them, “Go away and leave me in peace, you two!”

Because Omfra was the best dancer there, the celebration was soon abandoned, and everyone tried to help the poor fellow.  Granfer Wella, the oldest pisky of them all (he was nine hundred years old) was quite sure of what had happened.  “You’ve been and lost your laugh, my son,” he said.  “I’ve seen it happen once or twice; and I tell ‘ee you’ll never be right again till you find it.  ”

Nothing more dreadful can happen to a merry creature like a pisky than to lose his laugh. It is as if a dog were to lose his bark, or a song-bird her song.  Everyone searched far and wide, but Omfra’s laugh had completely disappeared, blown away by the wind, no doubt.  So, taking Granfer Wella’s advice, Omfra set off to find his laugh, following the westerly wind where ever it was.

The next day he was on St. Breaoke Downs, searching amid the furze and purple heather, and the great barrows where the ancient Kings of Cornwall are buried.  Passing one of these huge humps, he heard a scrabbling noise, and saw two delicated little hands reaching of the earth.  Omfra thought he’d better help this person who had apparently been buried; but he had a great surprise when he took hold of the hands and pulled out a little glossy grey mole, blinking in the strong daylight.

The mole did not thank Omfra for this action, but when she heard what he was doing on the downs she said, “Well, I certainly haven’t seen your laugh, for I’ve been underground all day.  You’d better go on across the moors; I daresay the Jack o’Lanterns have seen it.”

“Thank you, Mrs Mole,” said Omfra, about to go on.

“My name is not Mrs Mole,” she said huffily. “I am the Lady Want, and I was once a great lady with hundreds of servants and horses and fine dresses to wear. Only I was too haughty and vain, so they said, and Merlin the great Peller turned me into a mole. Now I have to spend most of my time below ground, but I still have my beautiful hands left to show”.

“I’m very sorry for you, Lady Want,” said Omfra. “But I must go and look further”.

So he ran and jumped and strode and marched across Bodmin Moors until, as it grew dark, he saw dozens of flickering blue and green lights wandering along the bogs and marshes. The Jack o’Lanterns wavered here and there, and Omfra found it very hard to catch one in order to ask; finally he managed to make one or two hear his story, but they hadn’t seen the laugh. One of them, however, said that earlier that evening, as the light was failing and he and the other Jacks were lighting up for the night, he’d heard the wind go overhead with a queer gurgling chuckling sound. It went towards Dozmary Pool, he said.

So Omfra trudged and tramped and staggered most of the night through across the tangled bramble and bracken, through streams and mires and bogs, until near dawn he came to Dozmary Pool. And there he saw at work, bailing out of the bottomless lake, the gigantic black form of Tregeagle; his face shrouded in the clouds, his legs knee-deep in the water as he bent slowly to and fro, trying to bale out the lake with a limpet shell with a hole in it.

Omfra was terrified at this colossal apparition, who from time to time roared and moaned louder than a gale of wind; but the pisky thought that up there among the cloud and winds Tregeagle might very well have heard the laugh go by the breeze. So a little later when day broke and the giant left off baling to take his rest (he had to work all night, lest the Devil and his Hell-hounds seized him), Omfra approached him with great timidity. Tregeagle was lying down across the turf, with an elbow on Brown Gelly and a foot sprawled out over Bolventor. Omfra crept up to the great cavern of the Giant’s ear and piped, “Please sir, can you help me? I’m a pisky, and I’ve lost my laugh.”

A huge finger and thumb like longstones were poked into the ear; Omfra was held up by them, then set down on Tregeagle’s hand, as big as a logan rock, while the giant examined him.

And Omfra, terrified, scuttled away after the wind, which was now whirling and gusting south-eastwards over the moors.

Many adventures he had on his journey; he came across the Pisky Night Riders, hundreds of them upon a horse they had taken from some stable, spurring the almost exhausted animal through bots and over hills; but they wouldn’t even stop to hear his question. He saw the Spriggans on Roughtor, unpleasant sprites who worked their evil tricks on farmers, ill-wishing their cows and drying up their milk, and blighting their corn at harvest time. He met the good saint Neot, who was himself only three feet tall, with his well in which there were always three fish, though he ate one for dinner every day. He saw the Old Sky-Woman plucking her goose and causing the snow flakes to come floating down and whiten the ground. But none of them could help him find his laugh.

At last, just as he was about to give up the search he approached the grey ruined walls that mark the remains of King Arthur’s Hall, and saw there a large sleek black chough with red beak and claws, sitting on the stones. The bird regarded Omfra keenly for a moment or two, and then said, “You seem very mournful for a pisky. What’s troubling you little man?”

“As it happens, I think I can help you,” said the chough; who was actually none other than King Arthur himself, who had been changed into this bird by Merlin, when mortally wounded, hundreds of years before. He told Omfra who he was, and the pisky was over-joyed to meet him, having hear so much about the great King and Pendragon who had led all Britain. “As I flew across the moors just now I heard a strange sound,” said the King. “The wind blew it along, humming and giggling and guffawing; so I followed it and caught it in my crimson claws. I put it down and rolled a stone on it to keep it quiet, thinking that someone would come looking for it. Look: there it is, in the corner of the Hall.”

And sure enough, there as the laugh, squirming and shaking and sniggering under a heavy round stone. “Come here beside me,” commanded the Royal Chough. “Now, Omfra, you must be very quick; as I roll the stone back, through yourself at the laugh with your mouth open, or it will escape again.”

Omfra made sure he was quick enough. As King Arthur moved the stone he dived forward, opening his mouth wide, and swallowed the laugh in a twinkling. And there he was, dancing and roaring with merriment again: “Hoho hoho! Thank you, dear Chough – I m-mean your M-majesty! Ho, ho, ho! I’m so delighted I can’t stop laughing now!”

And accompanied by the Chough, he laughed and giggled and chuckled, cavorted and cartwheeled and capered all the way from the high moors down to Trevose, where his brother piskies welcomed him at the ring; the Fiddler struck up again, and the six hundred of them resumed their uproarious dance.

And amid all the animals and birds who came to watch and listen there delightedly was King Arthur himself as the Chough, tapping his blood red claws and beak on the rocks, laughing and singing with them all. 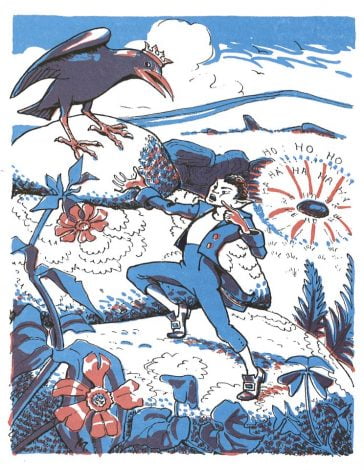