The king of East Cornwall, Bran Dhu, had two daughters, one fair and the other dark; their names were Elowen and Merouda. Elowen was tall and golden-haired, as gentle as a lily; but Merouda, who took after her father, was dark and fiery, so much so that all the suitors who came to woo her soon left Bran’s court on one excuse or another; because they couldn’t put up with her tongue or her temper.

One day Prince Pascow, the son of the High King of Cornwall, visited Bran’s castle. During his stay he fell in love with Elowen. But Bran was not at all pleased, for he had set his heart on Merouda becoming the prince’s wife; so the next day he sent Elowen away to a herdsman who lived on the moors, and whose wife was a witch. So Pascow had to endure several days of Merouda’s company, and though she was very beautiful in her dark passionate way, and managed to keep her temper, he became sadder and sadder because Elowen was no longer there.

When the prince returned home he told his father that he wished to marry Elowen. So the High King summoned Bran Dhu to Castle-an-Dinas, and commanded him to bring Elowen with him.

Bran, who was subtle and deceitful, and told more lies than truth every day of his life, arrived without Elowen, and said that his fair daughter had gone away on a visit to the moor where she had caught her death of a chill. He event told the High King and Pascow, with a great show of honesty, where Elowen was buried. So the next day, full of sorrow for his love, the prince rode to the moors and found the hersdsman’s cottage. Seeing him coming, the herdsman’s wife cast a spell on Elowen, and turned her into a bramble bush, which was what Bran had told her to do.

So on his arrival Pascow was shown the fine dresses Elowen had worn, and the mound that was supposed to cover her body, beside which the bramble was growing. Pascow was so overcome to discover it was true, as he believed, that he didn’t notice the bramble had white and mauve flowers on it, though it was January. Not once but several times during the next few months did he visit the cottage and the grave, sick with love, pale and wan from eating so little; and always there was the bramble in full bloom, for each time he came Elowen was turned into the bush.

But back at the High King’s court the royal Peller, or magician, heard about this bramble, and began to suspect that things were not as Bran Dhu said they were. He told Pascow of his suspicions. “But what can we do?” asked Pascow, hoping now that Elowen was not dead after all. “Let me change you into a chough, a bird that haunts the moors,” said the old man, who had learned his craft from the great Merlin himself. “Then you shall fly to the cottage and see for yourself.”

So the next day a black chough with crimson beak and claws flew down to alight on the cottage roof; and in a moment out came Elowen, dressed in ragged clothes, and called the cows in to milk them. Despite her poor and dirty dress she was as handsome as ever to Pascow, but he could see that her eyes were sad, and he heard her sigh often to herself.

When the Royal Peller heard that Elowen was alive he told the prince how to change himself from the chough back to his human form; and so the next day when Elowen went as far as the woods to pick lent-lilies, the chough followed her into the trees, flew down, and before her eyes changed into the prince she loved. Elowen was so happy and thankful to see him that she forgot the time; and they spent most of the day together, becoming deeper in love than ever.

When Elowen did not return the witch went out to look for her, and saw her with Pascow. She did not dare say anything to them then, but when Elowen returned to the cottage she said, “Your days of romance are over now, my lady; you shall be turned into a bitter thorny plant forever, and the prince shall marry Merouda!”

So Elowen was changed into a bramble for good, as the witch and Brand Dhu thought. They poured a magic potion on the flowers of the bramble, so that they grew into green and red berries, sharp and bitter to taste; and ugly hurtful thorns sprouted on the branches.

But the Royal Peller knew a trick or two more than they did. He anointed the beak of the chough, and told Pascow, “Fly to the moors and kiss the fruit of the bramble, and your love shall become sweeter than before; when the berries are as sweet as you desire bring some to me.”

So Pascow flew to the bramble bush and brought back berries which had turned black and sweet. Then the Royal Peller worked his most powerful spell, boiling it in his cauldron for seven days and nights. Next the High King and all his court, with Prince Pascow on his white horse, all went to the cottage on the moors. Bran Dhu was summoned before them; and there, in the sight of everyone the Peller poured his potion over the brambles. And Elowen came to life again before them, so that Bran Dhu could do or say nothing, except to give his daughter in marriage to Pascow.

After these times the bramble flourished and spread everywhere. And each September, after the flowers have turned to green and then red berries, the juicy black fruit appears, so that everyone may taste it and marvel at its sweetness. 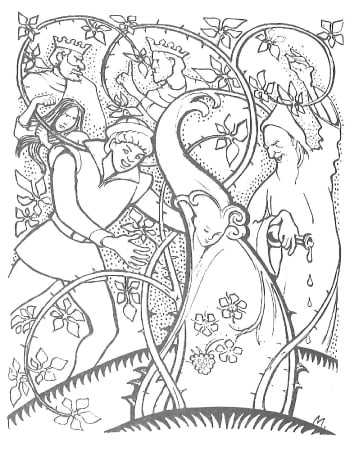