The mighty Abbot Petroc, who founded monasteries at Padstow and Bodmin, and many churches all over north Cornwall, was renowned for his goodness both to men and animals.

He came from Wales, where his father was a king; but although he had been brought up as a prince and trained to rule over people, he had a call to lead the holy life.  So when he was a young man he renounced his throne and went out as a missionary to convert the people of Cornwall to Christianity.  And he did more than any other single saint to bring this about.

Many stores are told of his miracles.  He tamed a wolf to act as his watch-dog; this animal never left the cell where Petroc used to retire, from time to time, for peace and solitude.  Once when his people implored his protection against a terrible dragon which was ravaging the countryside, he quelled the great beast by praying, bound it with his girdle, and led it to the sea where it swam away.

And one day when he was at prayer by his cell at Nanceventen (which means the Fountain in the Valley, and is now Little Petherick) he was disturbed by the sounds of hunting horns, and of an animal crashing through the undergrowth.  Then there sprang before him a little fawn, panting with terror, beseeching him wordlessly to protect her.  After her came four huntsmen on horses, and a pack of savage dogs; at their rear was Constantine, the prince of the district, a man known for his warlike ways and stubborn pride.

Seeing their quarry at the feet of the holy man, the huntsmen drew back and called their dogs off.  This put Constantine in a rage.  “Give up our prize forthwith!” he shouted.  “Don’t you know who I am?”

“I know well enough,” replied Petroc.  “But this little animal sought my protection – you shall not kill her.”

At this Constantine leaped off his horse and drew his sword, threatening to hack the saint into pieces.  “Nobody robs me of my sport without paying for it!”  But as he raised his sword St. Petroc, looking calmly into the prince’s blazing eyes, made the sign of the cross and murmured a few words of prayer.  And Constantine was instantly paralysed from head to toe, completely unable to move; spasms of great pain racked his back, his neck and arms.

“You black wizard – sorcerer!” he cried in fury.  “Release me, or my men will kill you!”  But his men had better sense, and cowered back to see the almighty power Petroc had invoked.  They began to make excuses for the prince.  “Forgive him Lord Petroc – for he’s been a good master to us, though he’s got such a hasty temper.  Let him go, we pray, and he’ll calm down.”

But Petroc was not satisfied.  “I will release you, Constantine, if you promise one thing:  to give up your warlike ways, your hunting and fighting, and become a Christian.”

Exhausted and racked with pain, Constantine agreed.  As he sank down, released from the spell, his men rushed forward to hold him up.  “Tis a hard thing to ask of me, great saint,” he said, “to give up all my rich robes, my feasts and sport, to become a poor monk.  But with your help I will do it.”

Petroc let the fawn go free, and saw her fly off through the woods.  Then he instructed Constantine and all his men in the knowledge of Jesus Christ.  Most of them joined the monastery at Padstow, or Lanwethioc as it was then called, or came to work there as masons, ship-builders or carpenters.  Constantine himself built a cell and a church a few miles west, above the bay where the thunderous breakers sweep in.  It is now called Constantine Bay after him.  There under Petroc’s guidance he lived in simple poverty, in prayer and praise for the rest of his life. 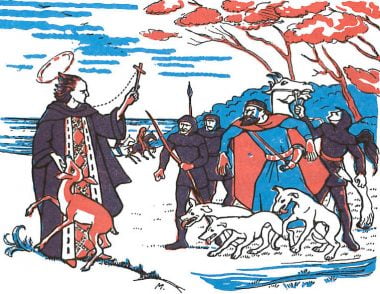