St. Piran is known as the merriest, hardest drinking, hardest living holy man Cornwall ever knew. He is also the patron saint of tinners, and his feast day used to be kept as a holiday in the parishes of Perranzabuloe (Piran in the Sands), St. Agnes and St. Day, and others where tin mining has always been the main occupation.

Piran was an Irishman, so legend goes; when still a young man he rose to favour as priest and counsellor to King Aengus of Munster. Aengus had seven harpers who could sing sweetly and play like angels, but one dark winter’s day they were all drowned in a storm whilst crossing a treacherous bog; all that was left was their harps, which Aengus hung on the trees beside the swamp so that the winds played sad tunes on them.

But Piran worked a great miracle: he prayed for three days and nights without ceasing, and brought back to life those harpers, though they had lain in the mud and ooze of the bog for more than a month.

For several years Piran advised King Aengus and heard him confess his sins; then the King grew tired of his wife, Queen Aisnin, and coveted a lady of the Court who was younger and more beautiful. Aengus wished to put away Queen Aisnin and marry the other; and Piran saw it was his duty to forbid this.

But the King would not listen to Piran’s warnings; so the holy man preached against the King before all the Court. At this Aengus became so angered against Piran that he condemned him to be bound to a millstone and thrown off the highest cliff in Munster.

On a cold winter’s day the deed was done: the saint was bound to the heavy granite stone and thrown over. But all the watchers were astounded to see, when the stone hit the sea far below, that Piran’s bounds were loosed and the stone itself actually floated.

It sailed with him on it far away from Ireland, amid the waves and storms of the Celtic Sea; Piran had no control over the floating stone, but when at last the voyage was over and it rolled ashore on the north coast of Cornwall, he realised what God was planning for him to do.

So he began again, teaching the Gospel to the Cornish people, who until then had worshipped their own Celtic gods of the sun and rain, and followed their Druids. He laboured to build himself a little church, which to this day still exists near Perranporth: St. Piran’s Oratory, or praying-place, the oldest Christian church in all Britain.

Piran loved a good story, and unlike many saints who lived only on bread and water, he enjoyed a good feast with the best wine; he always joined in the celebrations of his flock, whether it was a wedding, a parish holiday, a wrestling tournament or a funeral wake. One story told of him is that a rough local chieftain stole a young nun from a convent which Piran had care of, and wanted to keep her to marry her. But she was bound by her vows to the convent; the nuns were very distressed to lose their sister and St. Piran had to try to get her back. He managed it, but only by performing another miracle: the chief would not let her go, he said, unless he were woken up the next morning by a cuckoo calling. It was November time, cold and dreary; but Piran prayed all night, and the next morning, sure enough, a cuckoo appeared on the barn roof of the chief’s house and called loud enough to wake the dead. So the nun was returned, none the worse for her experience.

Piran was very popular among his people, and he became even more so after discovering how to smelt tin. One frosty night he built in his seashore cave a larger fire than usual: and as he was sitting before it mediating, a big black rock he had brought home for a hearth-stone suddenly began to melt down in the great heat, and soon a stream of silver metal ran out from it. He called the people round to see it; and it seemed to them another miracle, to see the bright metal coming from the black ore. Soon the miners of the parishes round about where digging and smelting tin, and selling it to merchants from all over Europe.

So Piran became the Tinner’s Saint, and that is why the flag of Cornwall is known as the Cross of St. Piran: a white cross on a black ground, symbolising the light of God in a dark world, and also the white tin metal against the black rock. 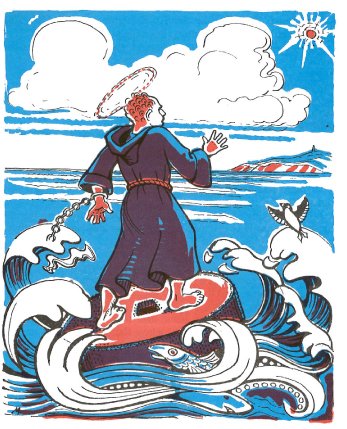