Bonaventure is a Norman-French name, and means Good Fortune. And good fortune indeed came to one of that name, a simple country girl, Thomasine (or Tamsin), once a shepherdess at Week St. Mary in the north of Cornwall. Good fortune also came through her to the scattered parish in which she lived.

It was the year 1463, when there was no proper road beyond Launceston into Cornwall. Bridle paths and a few stone bridges carried travellers and commerce across the great moor that formed most of the interior of the North and East. The flock of native sheep, the Cornish Knott, gave fine quality wool much sought after by merchants from Winchester, Bristol and London: one of these, a draper from Stepney, one Master Bunsby, came riding at the head of several pack-mules laden with bales. It was late in the afternoon and he needed a lodging for the night.

Seeing a young woman on the hill above him minding the sheep (which was necessary in those days when enclosed fields did not exist, and wolves still roamed) he hailed her to ask where he could stay. “Sir, you’ll surely be welcome at our place, poor thought ‘tis,” she said in her pleasant voice with its rich Cornish accent. Wondering at this tall maiden with fine features, straight gaze and plentiful chestnut hair, Bunsby accepted gladly, and accompanied her to the rough cob-built cottage where she lived.

Thomasine and her parents made him welcome in true Cornish style, with a great pie of pilchards, herbs and cream for supper. Bunsby was so taken with Thomasine that he asked her mother and father if they would allow her to go to London with him, to be a maidservant to his wife. He told them he had a fine household and was a man of repute in the City. The parents, who spoke little English, listened gravely, and then conversed as long and deeply between themselves in their Cornish tongue; at length the father spoke. “Tis a fine chance for our daughter to rise in the world, sir,” he said. “But as London be so far off, we’m feared we’ll never see her more.” However, Thomasine herself was eager to go; and after Bunsby promised that she should be taught to write, and would send letters home to them, the old people agreed. The next day the shepherdess departed, riding a pony beside the draper.

Behind her she left, surprised and saddened, her cousin John Denham. He and she had grown up together, and loved each other; he had hoped to marry her, but now suddenly she was ‘gone abroad’, as the Cornish folk put it. He went to the house of the White Monks of St. Cleer and became a novice, sure that there could be no other love for him but his dear Tamsin.

In London Thomasine became a favourite with both her master and mistress. She proved a most capable housekeeper and, when Mistress Bunsby fell ill, a tender nurse. On her death-bed the good woman expressed the wish to her husband that when she died he should marry Thomasine; “For,” she said, “I am sure you will find no better wife anywhere.”

Bunsby asked Thomasine to marry him. The Cornish girl, still only twenty years old, was torn between two feelings. She had heard no news of her cousin, but her father was ill and there was little money at home. If she married the well-to-do draper she would be able to send money home.

So she and Bunsby were married, and Thomasine was able to help her parents; the best doctor from Launceston tended her father, and soon his health mended. But she herself was not a wife very long; inside three years Master Bunsby was dead of the plague. By his will he bequeathed ‘all his goods and chattels, and his mansion, to his dear wife Thomasine.’ So the maid from the moors found herself a rich widow of London Town.

After a decent interval suitors declared themselves to her. The city life being to her taste, and having now heard that John Denham had taken his final vows as a monk. Within a few months she married John Gall of Milk Street; who is described as a ‘merchant-adventurer.’ Master Gall was certainly rich: soon after marrying him Thomasine made the first of a number of gifts to her native place. She bought twenty acres of land which she gave to the poor of Week St. Mary, and sent clothing and household goods to her mother. To her cousin John she sent a religious book which was not written but printed: perhaps the first printed book to be seen in Cornwall.

Five years later John Gall died. Again Thomasine was a widow; this time a much richer one than before. Gall also had left her all his goods; ‘money and plate, bills, bonds, and ships at sea.’ She was still quite young – not thirty yet: handsome and a great catch. She did not stay a widow for long. The next year she married Sir John Perceval, a banker and alderman of the City of London. The wedding made a great stir; hundreds of guests now met and entertained the greatest in the land. Soon she wrote home to her old mother (her father was dead by now) how King Henry VII had received her and her husband, and had gently chided her for being ‘a rebel.’ (The Cornish had twice revolted during 1497, even marching to London to demand redress for their grievances.)

More gifts Dame Thomasine now made to her beloved home: at her expense a road was made across the moor where she used to keep the sheep; she had a bridge built, and helped rebuild the church tower of St. Stephen-by-Launceston. And when she died at last, in 1530, still in London, a rich widow who had outlived three husbands, by her will she endowed a school in Week parish, to be under the care of her cousin Denham. And to the church where he would serve and sing, she gave a silver communion cup which had engraved upon it a forget-me-not.

Thus Tamsin Bonaventure brought good fortune to herself and those she knew in North Cornwall, and is not forgotten at Week St. Mary to this day. 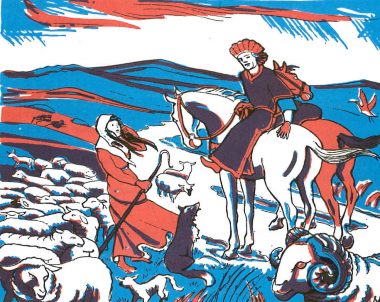