When the wind moans across the moor or yells on the cliffs, the old people used to say, ‘Tis the crying of Tregeagle.”

Jan Tregeagle is the great giant ghost of Cornwall; it is said he was a steward to a lord, Baron Robartes, and that left in charge of his master’s lands for too long, he lined his own pockets and robbed the poor tenants of his master’s farms.

Very rich he became; but so bad was his reputation that people said he had sold his soul to he Devil in return for more than his fair share of the world’s goods.

At last he died and was buried in St. Breoke church, but his soul was not to rest. Lord Robartes returned to his estate to make a reckoning. In the rent book he found that Tregeagle had not marked a cross against a certain farm, to show that the rent had been paid; though the poor farmer insisted that he had duly paid it to the steward. “I swear I paid it to Tregeagle,” he said to the lord. “May Tregeagle himself come before us to tell you so!”

There was a thunderclap overhead and the room grew midnight black. Slowly it grew lighter again, and there stood Tregeagle himself; and he bore witness, bound by an oath on the holy bible, that the farmer had actually paid his rent, though he had failed to mark the book. So the man was allowed to go home.

But once brought back from the dead Tregeagle could not be banished. He refused to go down to Hell, where Satan was waiting to torment him; and he could not go to Heaven because of all his past sins. Each night the Devil and his hounds hunted him around the parish. He troubled the lord and the people so much with his cries of woe and pleas for mercy, that the parson decided he must help both Tregeagle and the villagers. He and his brother churchmen ordered that the ghost of the steward should be bound to bottomless Dozmary Pool, away up on the high moors, where he must work ceaselessly every night to bale out the water with a limpet shell which had a hole in it. As long as he worked thus he would be safe from the Devil and the hell-hounds. But if during the night he once stopped, they would be able to seize him.

For months, for year Tregeagle laboured there, his giant form bestraddling the pool; and Satan tried in every possible way to stop him from working so that he could enslave his soul. Thunderstorms, fireballs, an earthquake, hurricanes and hailstorms: none of them it seemed could distract him or stop his baling, which made no impression on the water of the lake. Eventually, however, on a very dark night one of the hell-hounds leaped high enough to knock the limpet shell out of Tregeagle’s hand; and get away across the moors, shrieking and bellowing, fled the tortured giant with the devil pack at his heels.

To Roche Rock on Goss Moor he came, and sought sanctuary there by thrusting his head in through the window of the chapel which the holy St. Gonand had built high up on the rock. The evil spirits had to draw back whilst he was on sanctified ground, but they set up such a wailing and snarling that the people of Roche could not sleep. The hermit in his chapel prayed that Tregeagle should be moved elsewhere; his prayer was answered, and the Abbot of Bodmin came to banish him to the sandy beaches along the River Camel opposite Padstow.

There he was given the task of spinning ropes out of the sand; another interminable task, for each time he had spun a good length the tide rose and washed it away. Tregeagle’s miseries were as bad as ever; his cries and groans destroyed all peace in Padstow town. So once more he was removed, by St. Petroc himself this time, who with powerful incantation bound him to the estuary of the River Cober below Helston. There he had to carry sacks of sand from Bareppa across the river to Porthleven, until the beach had all been cleared. But the currents only swept the sand back again each day; and so another town was disturbed by Tregeagle’s unending howlings.

One night as he took an extra-heavy sack of sand across, a sudden storm blew up; caught off his balance, the giant stumbled and fell; down he went with the sack, and the sand spilled across the mouth of the river, forming the Loe Bar and Loe Pool. They remain there to this day, preventing ships from sailing up to Helston as they did in previous times.

Tregeagle’s cries were bad enough, but this misfortune was too much for the people of Helston; they clamoured and protested so much about the giant’s activities that the priests had to listen. Finally they sent him to the very tip of Land’s Ennd, to sweep the sand from Porthcurno beach round Tol-Pedn-Penwith into Nanjizal Cove. Few people are disturbed by him there. As fast as he labours the sea and tide bring the sand back again; this until Judgement Day he must continue, unless he fails or falls asleep, so that Satan and his Hell-hounds can take him below at last. 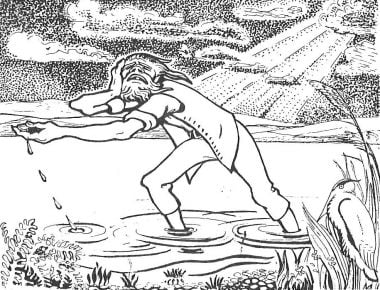