Yselt the Fair was married, at the age of fifteen, and by the dictates of her father, to Margh, King of Cornwall; and went to live with him in his castle at Tintagel. There above the rushing waves and amid the shrieking of seagulls, she accustomed herself to a lonely shut-up life; while Margh went out hunting or off to the wars with King Arthur, the great Pendragon who commanded the armies of all Brtain.

One day a young cousin of Margh’s, Trystan, came to visit Castle d’Or. And though Trystan was as bold a fighter and hunter as Margh himself, he had another side to him that soon endeared him to Yselt: he composed music and poetry, and would entertain all Margh’s court for hours, playing his harp, singing his lays, and telling histories so vividly that they could have sworn they saw the people he spoke of standing and speaking before them.

Margh, who was an ill-tempered man, soon grew jealous of Trystan’s attraction for his lovely young wife; and he taunted him into doing all kinds of difficult and dangerous feats, such as scaling the highest cliffs and swimming across raging torrents; and finding his way across the great moors at night with only the stars to guide him. But Trystan accepted these challenges blithely, and came triumphantly through each ordeal; and Yselt soon fell deeply in love with him.

At this time Margh had to go to the farthest point of his Kingdom, near Hartland Point, to try some prisoners; and so Yselt was left alone with Trystan. They confessed their love to each other, and she told him how lonely and unhappy she had become with her rough ill-mannered bear of a husband. Trystan swore she should not stay in Tintagel with Margh another night and made preparations to take her away.

When Margh returned he found both Yselt and Trystan gone. But where? None of the servants he questioned could tell him, even though he had several of them flogged almost to death. The lovers had been too clever for them.

In the dark dead of night they had slipped past the watchman at the castle gate; Trystan had put a sleeping potion into his wine that evening. They took no horses, lest th other guards should hear or see them; instead they crept down the steep winding cliff path to the beach below, where a small boat was hidden in a cave. Trystan then rowed them both down the coast to Boscastle harbour, where they came ashore and knocked at the house of a friend of Trystan’s, whom they swore to secrecy. This friend lent them horses.

A day later they were in the forest of Moresk, outside Truro (a mere village in those days); and there they hid amid the roots and leaves, the song-birds and squirrels for a week or more.

Meanwhile, Margh searched all Cornwall, sending out couriers and spies in all directions; and finally he heard a whisper that two young and handsome lovers had been seen entering the forest, and he sent his fastest riders there. But Yselt was gifted with second-sight, and in a dream she saw Margh pursuing herself and Trystan. So the next day the lovers crossed the Tresillian river here it meets the Truro, a treacherous stretch of water. Their horses were drowned and Trystan only just managed to save Yselt and himself. But they got across; by the time Margh’s men arrived a storm had blown up, preventing them from crossing and pursuing the couple. Two of them who tried to row across in a boat lost their lives, and ever since the place has been called Mauvais Passage, or Malpas.

So the lovers escaped to Britanny, which was Trystan’s birth-place, and Margh could not follow them there because it was out of his kingdom. The two were ecstatically happy for a while, walking on the seashore or exploring the great stone lines and circles, having eyes and ears for nobody but each other. Then came a summons for them both to return to Cornwall and appear before King Arthur at his court at Castle-an-Dinas; for Margh had appealed to the great Pendragon to pass judgement on Trystan for stealing his wife.

So to Castle-an-Dinas they came, hand-in-hand before the assembled Court: before the nobles, the ladies and the knights of the Round Table. Margh accused Trystan and said he was an adulterer. Both Trystan and Yselt both maintained they had not sinned, but had merely run away together because Yselt had been so miserable. And it was clear that though they could not say so, most of those present sympathised with the lovers; for Margh was generally detested among them. But Arthur was perplexed as to how to give judgement.

Finally Merlin the great Pellar, or Wizard, murmured something into the King’s ear, and then the king said: “Here is my judgement. Let Margh and Trystan choose in this wise: between them they shall share Yselt, the one having her wilst there are leaves on the trees, and the other whilst the trees are bare. Think well on this; which of you will have her while the trees are leafless?”

“I will,” said Margh instantly, thinking that then the nights are longest. But Trystan held his peace, saying nothing.

Then Yselt spoke up. “My lord King Arthur, I am content. I will go to Margh when the trees are all bare; and while they have leaves on them I shall be Trystan’s. But remember that the holly and the ivy, the laurel and the yew never lose their leaves; so I beseech you, great Pendragon, to make me Trystan’s for ever. ”

And so it was, to the joy of the whole court, and the bitter anger of Margh; who had chosen badly, and brought righteous judgement on himself. So Yselt became Trystan’s for ever. 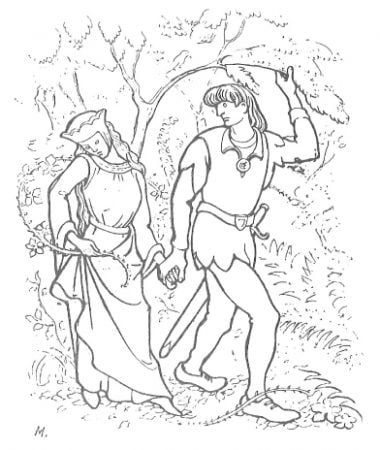