Castle an Dinas… a magnificent Iron Age hillfort in Cornwall

Castle-an-Dinas is one of the largest and most impressive hillforts in Cornwall, sited in an imposing position on the summit of Castle Downs with extensive and panoramic views across central Cornwall to both north and south coasts. It dates from around the second and third centuries BC and consists of three ditch and rampart concentric rings, 850 feet in diameter and standing 700 feet above sea level.

It is mentioned in Cornish legends as one of the seats of the Duke of Cornwall and as the place where Cador, Duke of Cornwall and husband of King Arthur’s mother, met his death. The existence of such legends suggests that this site remained important long after its construction in the Iron Age.

The hillfort is surrounded by three ramparts and ditches. There are two Bronze Age barrows in the central enclosed area and these may be traces of the first human use of this hill, although recent surveys have suggested that there is a levelled-off platform between the outer and inner banks and ditches which may represent the traces of even earlier (Neolithic) use.

Excavations carried out in the 1960s in the interior suggested that the main period of use was during the Iron Age, when the ramparts would have stood at their highest, probably topped by a wooden palisade. The main entrance lies on the south-west side, and the gateway had a cobbled surface. There is a wet, marshy area inside the enclosed area, suggesting that it might once have contained a well, making it possible to live on the site. It is likely that there would have been timber roundhouses and other structures and work areas. There are no traces of stone hut-circles.

Hillforts like this are now thought to have been less a military fortress and more a place of focus for the community, symbols of the wealth and power of the tribe, a central place for social ceremonies, trade and ritual.

A 20th century wolfram mine had a significant impact on Castle-an-Dinas, such as platforms cut into the prehistoric ramparts to carry an aerial ropeway known as a ‘blondin’ to transport skips of ore from the mine on the northern side of the hill to the processing works on the south. Within the enclosed central there are obvious places where recent human activity has disturbed the surface. The so-called “dew pond” marshy area may even hide a mining shaft sunk in the very middle of the hillfort within the past 100 years.

Despite continuous activity on this hilltop for the past two thousand years, this is still one of the most impressive and important archaeological sites in Cornwall. 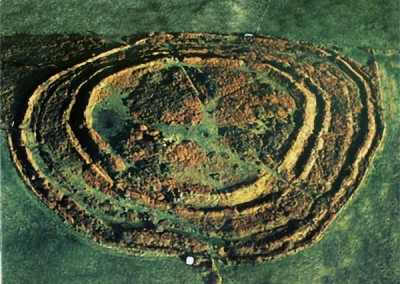 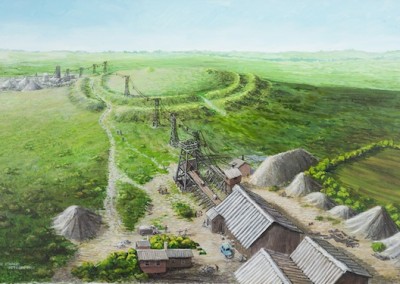 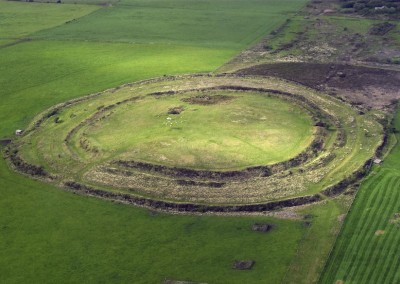 1 mile North of the A30 at Goss Moor (OS Map 200; ref SW 945624) near St Columb Major. Access is easy, once you find the right road. Follow the minor road East-South-East from the A39 roundabout at St Columb Major. Castle an Dinas is marked on the road sign at this roundabout. The turning to the hillfort is about a mile and half along this road. A car-park is located about 400 metres up this track.