The Doniert Stone, also known as King Doniert’s Stone, is one of two ancient carved stones which stand in an enclosure beside the road linking the A38 to Minions and Upton Cross, on the south-eastern side of Bodmin Moor. The two stones are parts of early mediaeval crosses, probably from the late 9th century AD.

The Doniert Stone is the decorated pedestal for a large memorial cross and is panelled on all four sides with a mortice cut into the top, probably to take a cross shaft and cross-head, each piece cut from an individual block of granite.

Three sides of the stone are carved with beautifully designed interlace patterns while the fourth is cut with an inscription bearing the name of a late Cornish King. The inscription reads “Doniert Rogavit pro anima” which translates as “Doniert begs prayers for the sake of his soul”. Documentary sources refer to a King Dumgarth, a King of Cornwall, who drowned in the nearby River Fowey in c 875AD and with whom Doniert has been identified.

The second stone on the site, known as “the Other Half Stone” is a decorated cross-shaft. A mortice in the top indicates that this stone was designed to have either a cross-head socketted into the top or a further length of shaft and then the cross-head. The decorated panel on the front is an eight cord plait and the back has broken off but the two sides are uncarved, It may be that the monument was never completed.

Both stones are only small fragments of original stone crosses which would have been impressive monuments. The location of the stones is also interesting, standing as they do beside a track only 12 miles from Hingston Down where in 838 the Anglo-Saxon King Egbert defeated a combined force of Danes and Cornish.   The stones would once have stood on open downland, like nearby Long Tom. From here tracks that head east across the downs towards Kit Hill, west to St Neot and Bodmin, south-west to Dobwalls and from there to Lostwithiel and Fowey, south to Liskeard and north up the Fowey Valley all crossed, making the location an important one.

Similar cross-shafts can be seen at nearby St Neot Church, at the church in St Just in Penwith, at Copplestone near Crediton, in the Royal Albert Memorial Museum in Exeter and at sites in Wales.

In the seventeenth century local miners prospecting near the crosses broke into an underground chamber beneath the stones. Despite various theories suggesting that the chambers might be a chapel or vault associated with the stones, it is more likely that they are the remains of mining activity in the area. 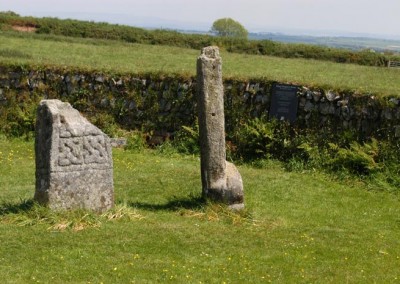