In February 2022 Cornwall Heritage Trust purchased nine hectares of land at Caer Bran, which includes a very important multi-phase hillfort and a range of later agricultural and mining remains.

The hillfort had traditionally been considered to be a fine example of a double-banked Iron Age enclosure, but research in the 1990s by Craig Weatherhill and the Cornwall Archaeological Unit (Anna Lawson-Jones and Peter Herring) discovered that it had origins in the Bronze Age. The monument contains three Bronze Age ring cairns that were enclosed by a bank, considered to be of a contemporary date. The subsequent re-enclosure of the monument took place in the Iron Age. The new bank and ditch respected the earlier ritual features, which can still be seen, and this continuity very much shows the importance of Caer Bran to the people of the local area.

The outermost bank of the hillfort is up to 4.0m high, fronted by a wide ditch, in places some 2.0m deep, with a slight counterscarp bank to the north-east. The older inner rampart is a less substantial earth bank, having been extensively robbed of stone. The external diameter of the enclosure is approximately 115m, while the interior space is some 60m across.

It is likely that the character of the landscape around Caer Bran has changed little over the last three thousand years, and the rough ground would have provided seasonal grazing for livestock from local farming settlements – including Caer Bran itself.

The place-name Caer Bran could also be quite significant. It contains two elements. Caer is Cornish for fort. Bran meanwhile means raven and is also used in the name of the nearby settlement of Brane. Alternatively, Caer Bran could mean the “fort of Bran,” which is a reference to Bran the Blessed, a mythological Celtic king who features in early Welsh mythology including the Mabinogion.

Other features in the landholding include medieval clearance heaps, as well as a number of post-medieval banks on the perimeter of the associated land. A post-medieval track, delineated by two stone-faced earth banks, crosses the area in a NNW-SSE direction, and goes through the middle of the hillfort and one of the ring cairns.

There are also considerable mine workings within the Trust’s ownership. These include an area to the north-west of the hillfort, which comprises lodeback pits, shafts and spoil heaps, while there are numerous prospecting pits dotted across the area. Documentary evidence of this mining activity is scant but there is a record of a Caer Bran mine. Also, to the south-west of the monument, there is a twentieth century stone quarry.

It is important to note that the hillfort and ring cairns are protected as a scheduled monument, but it has been on the heritage at risk register at many points over the last two decades. Historic issues have included erosion and the encroachment of scrub vegetation and bracken. However, now that the Cornwall Heritage Trust has secured ownership of the area, there will be a programme of vegetation management to promote heathland regeneration and associated works to enhance the setting of Caer Bran and the other archaeological sites in the area. 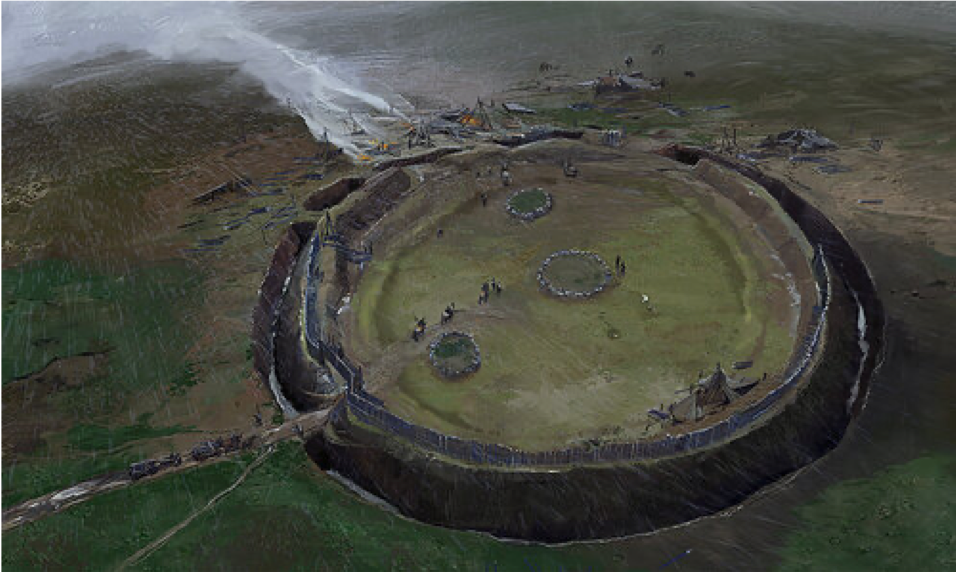