A well-preserved Iron Age village with a stunning fogou, an underground chamber whose purpose is unclear.

Lying on the south west slope of Caer Brane, this courtyard house settlement of the Iron Age and Romano-British periods was occupied from about 500 BC to AD 400.

It is especially noted for its well-preserved souterrain or fogou which leads to a beautiful corbelled inner chamber. Like its larger contemporary village not far away at Chysauster (English Heritage), Carn Euny consists of a number of “courtyard houses” of a type unique to West Cornwall. Rooms, huts, workshops and stables are built around a central courtyard, with a substantial doorway leading from the courtyard to the lanes and “streets” of the village.

The walls, up to a metre high in places, are well-preserved; only the wooden, thatch and turf elements of the houses have gone, leaving it relatively easy to stand in the heart of the village and reconstruct what it must have looked like 2000 years ago.

If the houses at Carn Euny are less impressive than those of other “courtyard villages” in West Cornwall, the same cannot be said of the stunning fogou in the heart of the village. A huge underground chamber with a side “beehive” room and creep passage leading off, this impressive structure was built by the Iron Age inhabitants of this village using a “cut and cover” method: dig a trench, line it with stones and cover it with huge slabs of granite.

Fogous (souterrains in Ireland and Brittany) only exist on the British mainland west of the River Fal. What they were used for remains a mystery and source of heated discussion between archaeologists and historians. Theories put forward include food stores, refuges, charnel houses, ceremonial and religious functions. One of the thrills of visiting the site is to stand in the fogou and speculate about why it was built. 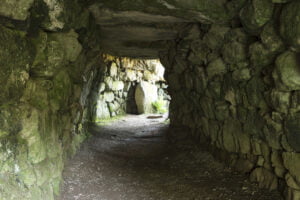 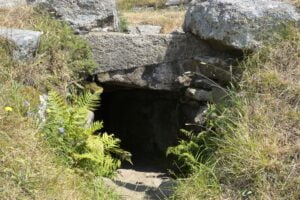 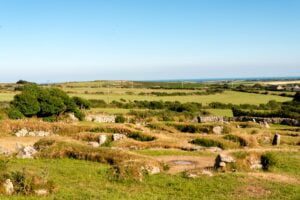