Stones in one of the three stone circles known as The Hurlers, near Minions on Bodmin Moor, a site managed by Cornwall Heritage Trust. This line of three early Bronze Age stone circles is one of the best examples of ceremonial standing stones in the south-west and is associated with many Cornish legends. The southern-most circle is incomplete, but the other two have been restored. Two standing stones, ‘The Pipers’, lie to the west of the site.

The three large stone circles run in a NNE to SSW line and were built in a moorland pass, between the slopes of Stowe’s Hill, an ancient hill top settlement to the north and Caradon Hill to the south. The site is located between the tributaries of the River Fowey to the west and the River Lynher, to the east. Multiple stone circles are often associated with sites between rivers, places through which traders and travellers would naturally pass.

Of the three circles, the southernmost is the smallest (32.9m diameter) with only nine stones. The central circle has an elliptical shape (squashed circle), 41.8 x 40.5m along its major and minor axis, and is the largest of the three circles, with 14 stones. The northern circle is 34.7 in diameter and has 15 stones, though four have fallen. Originally there were 24 stones in the circle.

The stones are set in place so that they all appear to be the same height. The central and the northern stone circles were once linked together by a granite pathway that ran through their central axis. The area has been extensively disturbed by mining and only the central circle has a large proportion of its stones in place. This is because they were re-set after the site was excavated in 1935-6. 14 stone uprights survive in the central circle, with 14 markers for missing stones, placed in empty stone sockets during restoration works. Originally all the circles are said to have contained 29 stones.

The inner faces of the stones are smooth and regular. Most of them are flat-topped and graded, so that the tallest stones are to the south, which may support the idea of a processional route through the circles leading towards the north. Excavations revealed a quartz crystal ‘floor’ within the central circle.

The northern circle was crossed by a boundary bank, and two “out-lier” standing stones, ‘The Pipers’, which lie approximately 120m to the west of the main circle site and could be boundary posts, or represent a ‘portal’, giving access to the Hurlers from the west, but may according to some archaeologists have a role in providing astronomical alignments.

To the north-east of the circles, on the ridge and visible from the site, lies the important Bronze Age burial chamber of Rillaton Barrow: so the Hurlers must not be seen in isolation. They are part of a remarkable ‘ceremonial landscape’ of stone circles, stone rows, standing stones, cists and cairns. The numerous alignments apparent in this area, between man-made features such as the large barrows on Caradon Hill and natural landscape features such as tors, suggest that the Hurlers may have been part of an important processional route.

The name The Hurlers refers to an old local tradition about the creation of the circles. Folk tales explain that the stones represent local people turned to stone by a humourless god for playing the game of hurling on the Sabbath.

Film of The Hurlers 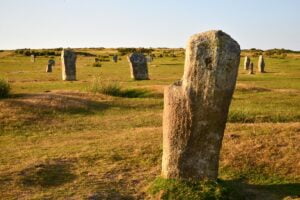 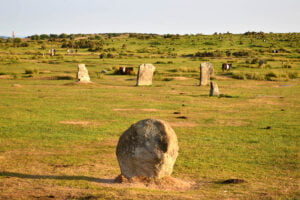 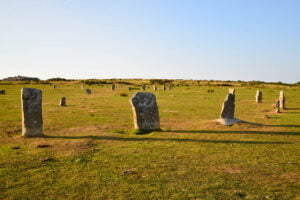 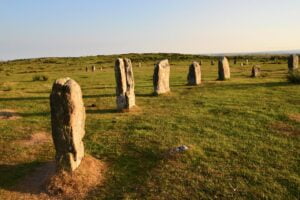