Built between 1839 and 1842 by its owner Joseph Thomas Treffry, this viaduct, 90 feet high and 670 feet long, had the dual purpose of carrying both a tramway and a high level leat across the beautiful Luxulyan Valley. It was the first large civil engineering structure of its kind to be built in Cornwall, and is now a Scheduled Ancient Monument.

Joseph Treffry realised that the Luxulyan Valley was a good route between the south coast and the high ground in central Cornwall which was being mined for tin and copper and quarried for china clay. He built a new harbour, completed in 1829, at Par, a canal up the valley to Ponts Mill and an inclined plane railway to the Fowey Consols mine on Penpillick Hill. To bring water power to the mine he built a leat from Luxulyan along the west side of the valley. He also acquired the port of Newquay and land and mines in the area of Goss Moor, and planned to link them by a railway system.

Work began in 1835 on a tramway up the valley, but this was soon abandoned. Treffry then started work on a much larger-scale tramway, with an inclined plane from the canal basin at Ponts Mill, past the Carmears Rocks, to the level of the top of the valley, then a level run through Luxulyan and on to its terminus at the Bugle Inn near Mollinis.

This route needed a high-level crossing of the river and so the great viaduct was built. At 670 feet (204 m) long and 90 feet (27 m) high it was the most advanced engineering project in Devon and Cornwall. It was built of stone from the nearby Carbeans and Colcerrow quarries, and the lines from the quarries to the viaduct were the first parts of the tramway to be operational. The tramway was completed in 1844.

The viaduct carried both rails and a water channel (leat) to bring more water for the Fowey Consols. The quality of the design and construction had to be precise, or the water would not flow. The water channel, lined with “puddled clay”, no longer carries water from the leats due to the frequent leaks and complicated and challenging maintenance of the channel.

On its way down the valley the water that crossed the viaduct/aqueduct was used to power the Carmears incline, by means of a water wheel, 34 feet (10 m) in diameter. This enabled the tramway to pull loads up the incline, against gravity.

The railway was continued alongside the canal to Par Harbour, a project not completed until after Treffry’s death in 1850. The whole complex fell into disuse during the late 19th/early 20th centuries and the last of Treffry’s rails were removed in 1940.

Cornwall Heritage Trust purchased Treffry Viaduct from the Treffry family in 1989. The Monument is currently on the Heritage At Risk Register due to the leaks from the aqueduct channel and the resulting necessity to divert the water from flowing across the channel. Alongside Historic England the Trust is working to secure the future of the viaduct and eventually see its removal from the At Risk Register. 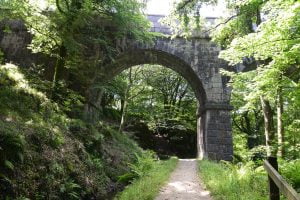 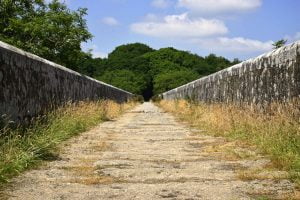 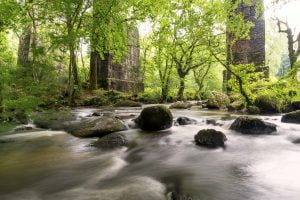 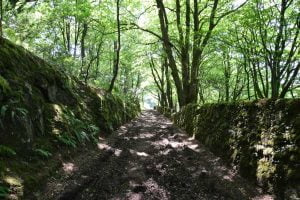