This example of a Neolithic or early Bronze Age entrance grave stands on a grass verge next to a road, near the Merry Maidens Stone Circle, which is known as ‘Dans Maen’, or the stone dance. The north-west third of the mound is now under the B3315. It was originally 15m in diameter, surrounded by a kerb of large stones.

Tregiffian is a type of monument known as an “entrance grave”. Tombs like this are unusual and are found in the far-west of Cornwall and on the Isles of Scilly. Around 14 definite Entrance Graves are known on the mainland and about 106 on Scilly. The entrance to the chamber is through a gap in the kerb, with a short passage leading to a small chamber, roofed with granite slabs.

This was a burial monument. Graves such as this usually contained cremated bone and charcoal deposited in a small pit in the chamber floor; or one or more pots or urns filled with cremated bone. The burials range in date from late Neolithic to middle Bronze Age, telling us that sites like this were used and re-used. Entrance graves are usually dated using pottery finds but the true age of these tombs is uncertain. They may have been built in the late neolithic period and added to or modified during the Bronze Age. It seems likely that entrance graves were constructed from the late third to the early second millennium BC, an overall period of use covering about 700 years.

Tregiffian contains one particularly fascinating feature. One of the two “portal stones” at the entrance to the chamber is decorated with a pattern of 25 artificial hollows known as “cupmarks”. Rock art like this is rare in Cornwall and the original stone has been removed to the Royal Cornwall Museum at Truro. The stone at Tregiffian today is a cast replica of the original.

The chamber is 4.9m long and has composite side walls of large edge-set slabs at the front giving way to dry stone walling towards the rear. The chamber is roofed with stones nearly 3m long, probably five originally, four remaining today. 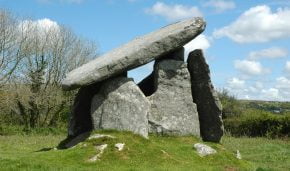 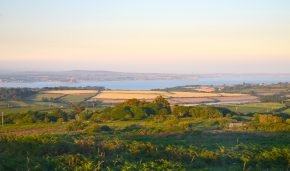 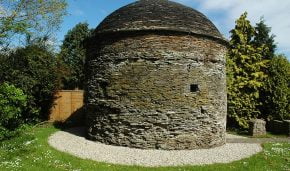