The victories for Hopton with the Cornish army provided the impetus for campaigns in Devon and Somerset.

Taunton and Bridgwater were taken by the Cornish army, but Sir Bevil Grenville was killed at the Battle of Lansdown in Somerset and Hopton was seriously wounded.

Hopton had marched against Sir William Waller’s army which occupied a commanding position on the top of Lansdown Hill. Grenville’s Cornish infantry stood firm even when the Royalist cavalry was routed in the early stages of the battle, then Grenville led a counter-attack against the Parliamentarian position at the top of the hill.

The Cornishmen succeeded in gaining the hilltop and forcing the Parliamentarians to withdraw, but Grenville was killed in the assault. His Cornish soldiers refused to fight under any other leader and returned home, carrying the body of Sir Bevil. It was buried in a tomb in Kilkhampton Church.

Bristol fell to Hopton’s Royalist troops, followed by Exeter. On December 13, the Royalists began a heavy bombardment of the northern defences of Plymouth but with little effect. Sir Richard Grenville, 1st Baronet, having previously declared for Parliament, invited his troops to follow him into the King’s service and parliament proclaimed him a traitor. 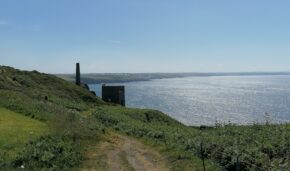