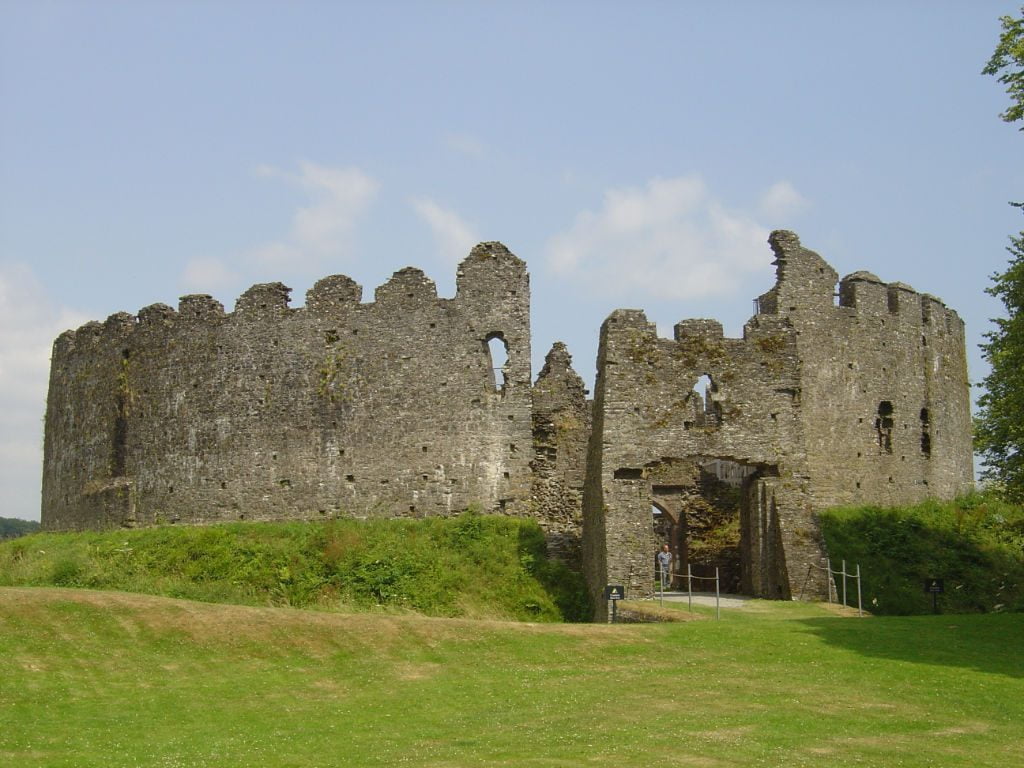 Restormel Castle – Built around 1100, this is one of the best-preserved Normal motte-and-bailey castles in Cornwall. It dominates the Fowey Valley near Lostwithiel.

With the arrival of the Normans to the British mainland in 1066, the River Tamar became the agreed border. There was an acceptance that Cornwall had a separate identity to the rest of England but Cornwall was nevertheless included in the feudal political system established across the country.

The first Earl of Cornwall was Cadoc, a survivor of the Cornish royal line.

A revolt based at Exeter forced the King to march into Cornwall in 1068 after which he gave most of Cornwall instead to Count Brian son of Eudes, Count of Penthièvre in Brittany, who had fought with William at Hastings.

In 1069 he fought-off an attempt by Harold Godnwinson’s sons to reclaim the English throne. When Brian died leaving no heirs William gave Cornwall to his half-brother Robert, Count of Mortain, the second-largest landholder in England.

He had supplied 120 ships for the invasion of England, fought at Hastings, appears in the Bayeux Tapestry and was a loyal and trusted servant: most of Cornwall was his reward. The King kept some Cornish land for himself and some was kept by existing monasteries and by the Bishop of Exeter.

The Domesday Book 1086 and the growth of towns

The Domesday Book recorded that the very best of the Cornish estates, 227 (of 350) and valued at £424, were in the hands of Robert, Count of Mortain. The remainder were held by a mixture of Anglo-Saxons, Bretons and Flemings.

By this time Cornwall was divided into 7 (later 9) administrative areas known as ‘hundreds’. The original hundreds were Penwith, Kerrier, Pydar, Powder, East and West Wivel and Trigg. Trigg was then subdivided to create two more “hundreds”, Lesnewth and Stratton.

Robert of Mortain became the Earl of Cornwall and built Launceston Castle. A new town grew up around the castle and this became the capital of the duchy. At around the same time castles were built at Trematon, Restormel and Tintagel.

Truro was given its charter in 1173 by Reginald de Dunstanville, 1st Earl of Cornwall ‘to my free burgesses of Truro’. It was addressed ‘ to the barons of Cornwall, and all men both Cornish and English’. The language shows the strange relationship between Cornwall and the English crown, very much an independent nation under the ‘protection’ of the English state.

The biggest settlement in 1086 was Bodmin, with an estimated population of 1000 people. Domesday, of course, only lists men so the numbers of women and children have to be guessed-at. It had 68 a market and 68 dwellings, becoming a borough in 1285. 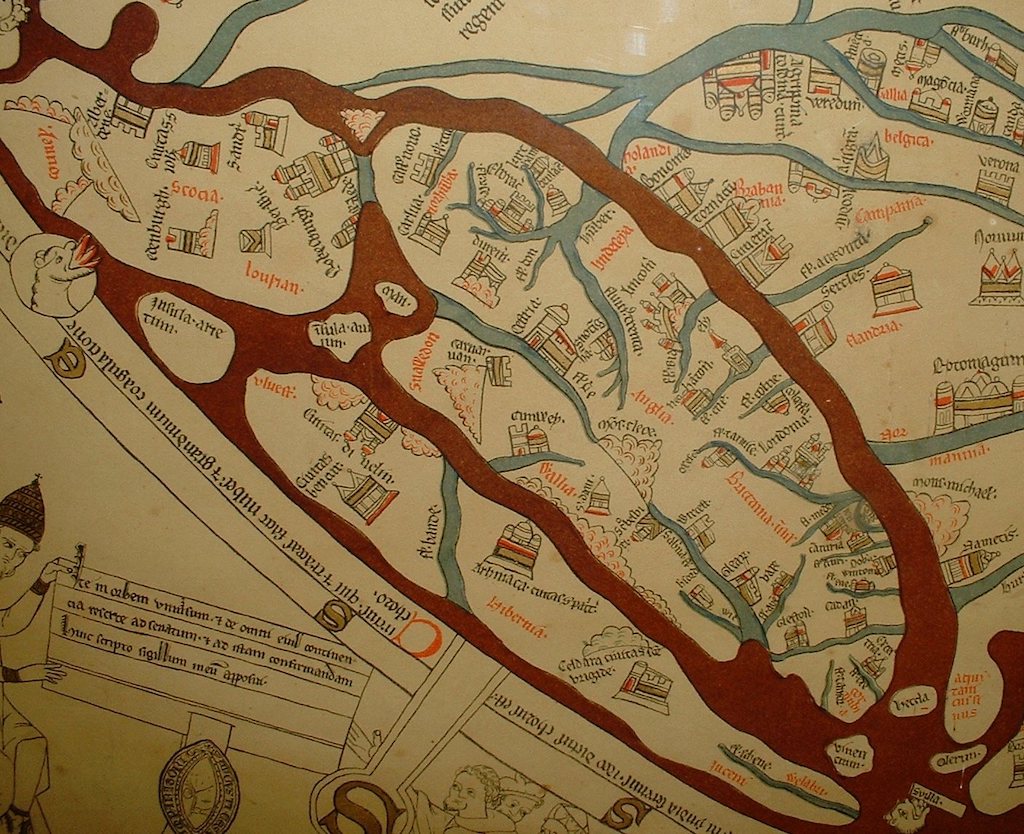 Launceston was the capital of the Earldom of Cornwall, its wooden castle soon was replaced by one of stone; so important was Launceston that it was the only Cornish town to have a town wall and gates built around it.

However, in about 1280 Lostwithiel was made the duchy capital by Edmund , Earl of Cornwall and the ‘Duchy Palace’ was built in the town at about this time. This once extensive building incorporated the Shire Hall, the Exchequer of the Earldom (later Duchy), the Stannary Gaol and the Coinage Hall. (see later notes on the stannary system).

In 1295, reflecting their status within Cornwall, Truro, Bodmin, Tregony, Launceston and Liskeard were each granted the right to send 2 representatives to the Parliament of Edward I. This privilege continued until the Second Reform Act of 1867.

The Black Death (or “Great Pestilence”) reached Cornwall 1349, almost certainly by ship, peaking in 1350/1 and breaking-out again in 1352. Estimates suggest that towns such as Truro and Bodmin lost half of their populations.

The Dukes and Duchy of Cornwall

Throughout the middle ages noblemen were created Earl of Cornwall, but each time their lines soon died out and the title lapsed for a few years. Here are some of the notable holders of the post at this time:

Cornwall was still a distinct and to a great extent separate part of the kingdom. The Cornish were expected to play their part in the defence of the kingdom. In 1415, for example, Cornish archers fought under a banner depicting two Cornish wrestlers at the Battle of Agincourt.

In 1485 Polydore Vergil, the Italian cleric commissioned by King Henry VII to write a history of England, wrote that “The whole country of Britain is divided into four parts, whereof the one is inhabited by Englishmen, the other of Scots, the third of Welshmen, the fourth of Cornish people … and which all differ among themselves either in tongue, either in manners, or else in laws and ordinances.”

Most of the parish churches in Cornwall date from this time. In the medieval towns which developed during the middle ages there was usually just a “chapel of ease”, with the rights of burial and other parish functions remaining at the ancient parish church often some distance away. An example of this is Penzance, whose parish church was at Madron, some two miles to the north of the town.

Over a hundred medieval holy wells exist in Cornwall, each associated with a particular saint, though not always the same one as the dedication of the nearest church. One of these, at Dupath, is in the protection of Cornwall Heritage Trust.

Various kinds of religious houses existed in medieval Cornwall but there were no nunneries; the benefices of the parishes were in many cases appropriated to religious houses within Cornwall or elsewhere in England or France. Perhaps the most significant religious house of this time was Glasney College, set-up at Penryn by the Bishop Bronescombe of Exeter in 1264-5. This fortified residence, a “collegiate house”, housed 26 clerics and had its own church, domestic quarters, refectory, chapter house and cemetery. It became a focal point for Cornish literature, largely religious-themed mystery plays, in the 14th century. It was subsequently destroyed during the Reformation.

Medieval Cornwall supported an internationally important tin industry. Tin streaming and shallow shaft mining provided employment and created wealth far beyond the norm for such a remote and poor agricultural area. Shallow mining effectively mapped the major areas where tin occurred and many valleys in Cornwall were streamed for tin.

Archaeological evidence of these activities still exists on Bodmin Moor, in West Penwith, on Goss Moor, Breney Common and Redmoor, as well as in the wooded valleys throughout Cornwall. The landscape of the region’s medieval tin mining industry represents the most extensive remains of pre-1700 mining in Britain.

Streaming had some particular consequences: the removal of millions of tonnes of overburden, together with the finely crushed waste of ore-processing resulted in the rivers and estuaries in the region becoming heavily silted-up. Looe River, the Fowey, Fal, Carnon, Helford, Cober, Hayle and Red Rivers all have mineral deposit in them many metres deep and tidal limits have been progressively pushed downriver, many former ports becoming subsequently marooned amidst marsh and mud-flats. 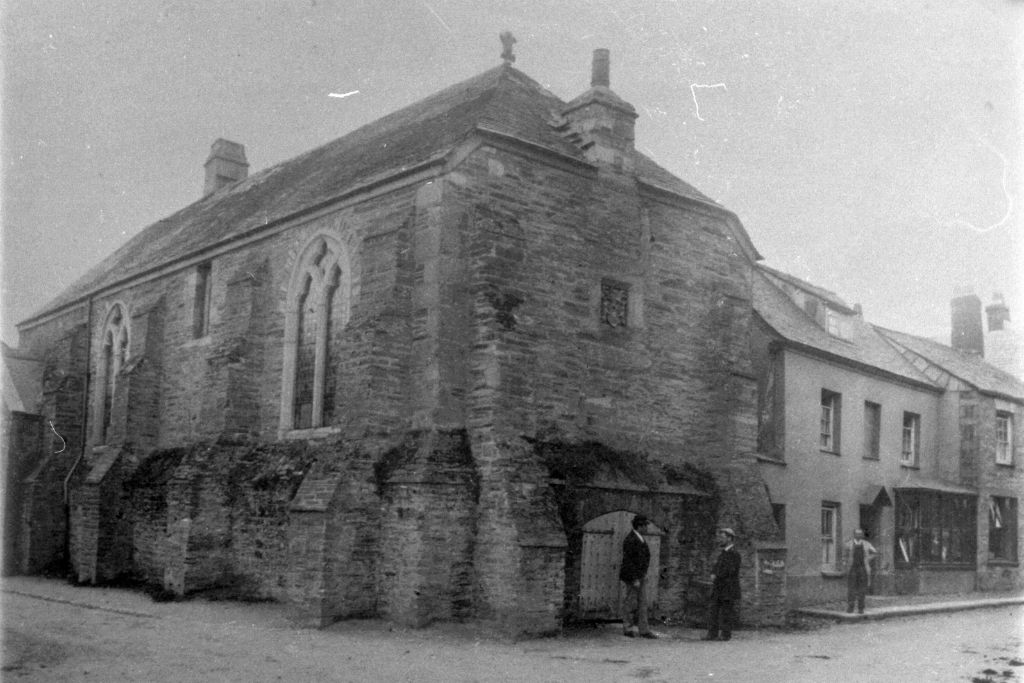 The importance of the tin industry at this time led to the establishment of a special legal framework, first enshrined in a charter from King John in 1201, because of ‘….the desire of the Cornish tinners to be separated from those of Devon…’ . This charter gave privileges to the tinners, and their industry, exempting them from normal laws and taxation, allowing tinners to search for tin on common land and gave them their own courts and goal at Launceston. In return for these rights they paid a special tax, that was calculated at the time of coinage. The areas of jurisdiction were defined as four Stannaries in Cornwall: Foweymore (now Bodmin Moor); Blackmoor (Hensbarrow Moor north of St Austell); Tywarnhayle (St Agnes, Truro and Scorrier); and the united Stannaries of Penwith & Kerrier.

No fixed boundaries were set for the stannaries so in effect they covered all of Cornwall and as each stannary appointed 6 “stannators” to the “Stannary Parliament”, which represented all of Cornwall.

Each stannary had a “stannary town” (or towns) where tinners presented their blocks of smelted tin to be tested for purity, before paying tax on them. This provided the Duchy of Cornwall, set up in 1337, with a significant source of revenue. The Duchy was also probably the largest single mineral lord in the south-west. It owned the beds of most of the rivers and some of the estuaries, and royalties were earned from tin-streaming activities conducted in them.

The importance of tin mining during this period is clear from the Stannary Charter of 1305. This re-affirmed the Crown’s right of “pre-emption”, (the crown had “first call” upon the tin mined in Cornwall). This was confirmed politically when in 1338 Edward the Black Prince, (eldest son of Edward III) was created the first Duke of Cornwall.

How The Mining was Done

Tin-streaming technology in Cornwall was similar to that used elsewhere in Europe at this time. A number of contemporary European writers describe an industry that had already developed sophisticated water-powered machinery, especially for pumping water from lower levels.

This included the use of man-made channels or “adits” to take the water away from the mine. However, mining was still hampered by the amount of water present underground. In 1602, Richard Carew, in his survey of mining in Cornwall, commented on the limitations of the available technology, especially as mines became deeper:

“For conveying away the water they pray in aid of sundry devices, as adits, pumps, and wheels driven by a stream and interchangeably filling and emptying two buckets, with many such like, all which notwithstanding, the springs begin to encroach upon these inventions as in sundry places they are driven to keep men, and somewhere horses also, at work both day and night without ceasing, and in some all this will not serve the turn.”

Tin was smelted by mixing the simple oxide ore (cassiterite) with carbon (peat or wood charcoal) and reducing it (extracting the oxygen from the ore in a fire, leaving behind the metal) in a granite furnace. This had air blown into it by water-wheel- powered bellows. It is likely that tin ore was smelted twice: once, crudely, at the mine and a more refined process at the stannary town for taxation purposes.

By the fourteenth century blowing houses began to appear. These were more sophisticated smelters, capable of making the purest grade of tin (grain tin) which fetched a higher price.

Wood and The Early Mining Industry

During the thirteenth and fourteenth centuries oak woodland in Cornwall was carefully managed to make charcoal for tin-blowing.

Shallow shaft workings also needed a supply of oak for shoring-up shafts and tunnels. Old oak woodlands in Cornwall such as in the Luxulyan Valley or the thickly wooded banks of the river Fowey, still contain the multiple trunks of ancient coppiced trees and the platforms where the charcoal was made. On the moorland peat was cut to make peat charcoal. Goonhilly Downs and Bodmin Moor were important sources for this fuel.