The human history of Cornwall begins with the reoccupation of Britain after the last Ice Age perhaps 10,000 years ago.

The upland areas of Cornwall were the parts first settled, probably as there was less clearance needed; it was likely they were first occupied in Neolithic times. Mesolithic and Palaeolithic remains are almost non-existent in Cornwall.

“Megalithic” (“big stone”) monuments of this period exist across Cornwall. “Quoit” is the Cornish name for one common type of grave built using a number of large stones set upright, supporting a massive horizontal capstone forming a small chamber.

These stone chambers were built around 3000 BC and were probably used for communal and dynastic burials in the Neolithic period. Several of these are to be found in West Penwith (Mulfra, Zennor, Chun, Lanyon, and the ruined examples at West Lanyon and Sperris) though there are two or three further east in Cornwall – Carwynnen near Praze-an-Beeble and Trethevy Quoit near St Cleer (managed by the Cornwall Heritage Trust). They are also common in Wales, Ireland and Brittany. Archaeologists call such sites “chambered tombs” or “portal dolmens”, and date them to the 3rd or 4th millennia BC.

Many of these “quoits” are surrounded by the traces of a low stone and earth mound, probably not very high originally, leaving the capstone visible.

Finds generally from these kinds of monuments are almost unknown in Cornwall because the naturally acidic moorland soils destroys organic remains. However, comparing Cornish sites with similar monuments elsewhere in Western Europe especially western France suggests that they were used as repositories for ancestral remains. There is some evidence – from Neolithic tombs in Wessex such as West Kennet long-barrow, for example – that the bones were from time to time removed, returned and re-arranged.

Francis Pryor, amongst other archaeologists, suggests that they featured in ceremonies associated with an ancestor cult; communities at this time were becoming increasingly settled and stable and such rites represented attempts to establish hereditary ‘ownership’ of a territory and to develop a communal or tribal identity. So the quoits, often in prominent hillside positions, were statements of power and ownership in the landscape, as much as they were places for venerating the dead.

Another group of remains from the late Neolithic period found in Cornwall may be associated with another wave of settlers who arrived from north-western Europe around 2500BC, bringing with them a different style of megalithic tomb. These, whilst common in Brittany, for example, are only found in Britain in West Penwith and the Isles of Scilly.

They are known as Scillonian chamber tombs or entrance graves. Much like the earlier quoits, large stones support a capstone or capstones, creating a chamber, to which a stone-lined passage leads from the outside. Often they too are surrounded by a low mound and kerb of stones. Amongst the best and most intriguing of these in Cornwall is the tomb at Ballowall, near Cape Cornwall. Cornwall Heritage Trust cares for the once magnificent entrance grave at Tregiffian, near the Merry maidens Stone Circle at Lamorna, which is now cut in half by a road. 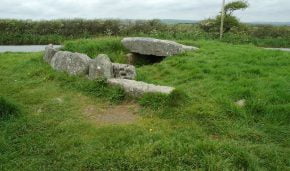 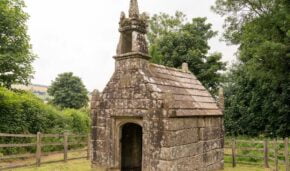 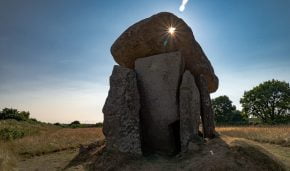