Sir Richard Grenville arrived in Plymouth in March 1644 to maintain a blockade, but it resulted in a stalemate as the inhabitants obtained enough provisions to survive. Robert Devereux, 3rd Earl of Essex, arrived in command of the Parliamentary army of 8000 men and forced Grenville to retreat to Cornwall across the River Tamar. King Charles marched west in pursuit of the Parliamentarian army. 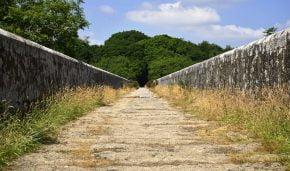