On Thursday 9th December, 2021, my year four class went on a trip to Geevor Tin Mine because we have been learning about the mining and how important it is. We were so excited for this trip as we had done unbelievable activities.

At 8:45, we got on the coach, we were very impressed . As we approached the Tin Mine, we saw the buildings. We went into a building that sort of looked like a class room where they gave us some hard hats. First thing we did was we went to see how many children could fit in the shaft. I had lots of fun because I got chosen to go into the drivers place where they listened to the bells to see what levels the miners were at. Then, we did some hand mining and smashing rocks. That was really fun! We also did some panning. I got a bunch of gems. One was called the devils eye, which was red with black lines. Then, we went in the old tunnels.

My day was amazing! I enjoyed panning so much, I would definitely recommend going and trying it out your self as I had a lot of fun.

On Thursday 9th December both of the year 4 classes went to Geevor Mine. We went on a trip to Geevor because we have been learning about Cornish Mining in History.

Before Lunch we went into the mill and did some panning to find stones. We even found some fool’s gold in the sand and devil’s eye. Next, we looked at a shaking machine called a shaking table that gets all of the sand off and keeps all of the rocks and jewels on it. After that, we came up to the surface and went into a mine and saw some old miner things. Next, we used a magnet to look at the rocks on the floor and found some magnetite.

My favourite part of the day was going and doing the panning because we got to see how they would have done it without machines hundreds of years ago.

Thank you again for accepting the grant else we couldn’t have done this trip. 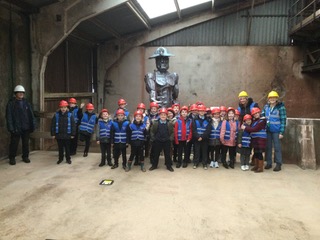