Dear Cornwall Heritage trust, thank you for our wonderful trip to Geevor tin mine. We learnt so much about Cornwall heritage and our mining past. The children had a brilliant time and are now going on to create a mining project for our special mining show ‘Marvellous Mines’ in July. Thank you again for the funding to support such a brilliant trip.

Report by Zach
On Monday the 24th May we went to Geevor tin mine. Firstly, we got on the coach. It was freezing cold but we eventually warmed up inside and eventually we got into our groups. We got our mining helmets on and walked over to a museum shed. We learnt about early mining, practised holding the hand barrow, making a hole in a rock and hammered the rocks. We left the early mining shed and went to the panning area where we searched for crystals and gems. We walked again and looked at many mining things and had lunch. Afterwards we went underground and walked around again. We said goodbye and went back to school.

Report by Ella
On Monday the 24th of May we went to Geevor tin mine. Firstly, we went into the early mining hut and we were carrying the handcart and smashing rocks. After that, we split into groups and went into the mill. It has lots of shakers which were separating the tin and sand. There was also water underneath that poured into it. We went down lots of stairs leading us to panning. Panning was lots of fun, I found lots of gems. After lunch we went into the dark mine it was so fun because we were wearing hard hats. Our tour man was called Mark as we got to the mine we met a man called Stevey boy, he was called that because when he started mining he was the youngest there. 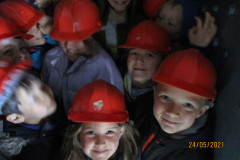 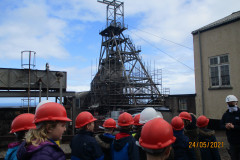 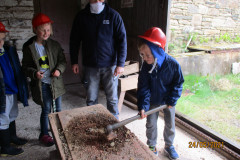 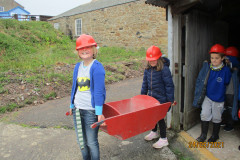 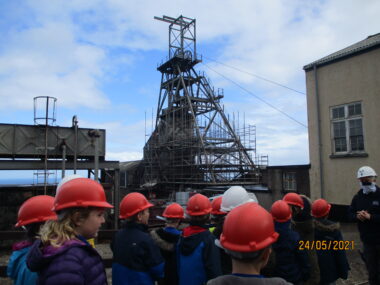