“We bolted up and down hills, forwards and backwards and finally arrived in the city of Truro. We eyed the monstrous cathedral spires stabbing the fluffy, white clouds. There was a chicken on top of the weather vane and I thought it was a “holy chicken”! After being counted, we threaded our way through the buildings. Eventually, we entered the heart of Truro, where the museum lay.” (Freddy- Kittiwakes)

“The museum’s corners were marked out by crinkly pillars, made out of pale stone to match the historic walls. Then all of a sudden, a man with twinkling eyes and a beaming smile appeared. Later, once we had been shown where to put our stuff, he introduced himself as Mike and showed us another merry soul called Kaitlin.

Next, we were definitely in for a treat: I mean seeing a real life mummy is awesome right? Before everything could happened, Kaitlin told us a few things like how to find the Egyptian objects in the museum. My group was going to be shown the mummy by Kaitlin whilst the others drew Egyptian artefacts. As we headed through the cabinet filled room, I spotted a sarcophagus and a mummified cat: it was all too much to take in at once, but luckily we would be given time to explore later. Before we went into the special place where Iset Tayef Nakht’s mummified body lay, Kaitlin reminded us that we should respect him just as much as we would respect each other. Inside the resting place, it was dark, but you could see quite easily on the left was Iset Tayef Nakht’s wrapped up body and on the other side were many jars and little objects. We all looked expectantly at Kaitlin as she told us how the Victorians had destroyed his body and then she showed us his brain!

Before we left the museum we had one more duty to perform – an Egyptian play of the journey to the afterlife! A couple of people put on beautiful masks. Matthew played the Pharaoh and everyone else were gods and goddesses. Luckily he passed the weighing of the heart; many questions from the gods and Osiris liked him! Sadly, it was time to go. We said goodbye to Mike and Kaitlin before heading off to the cathedral. I wondered what that would be like… “(Lily – Kittiwakes)

“Going to the sensational museum was a treat, but I had to say, I was starving, so I gobbled down my delicious lunch when we were at the cathedral. I felt a wave of thrill flow through my body as we got ready to absorb all the fantastic facts and articles that are on display at the cathedral. Kirsten, our guide and teacher at the cathedral told us all about how the Diocese of Truro was formed; the first bishop of Truro and the man who designed the building.

Kirsten gave us the challenge of finding facts about the Bishop of Exeter. He was in charge of 698 churches and sometimes had to travel 140 miles by railway to visit them. Also he wasn’t liked because of a preacher called John Wesley. He was nicer to poorer people and went to them instead of them coming to him. The cathedral was as sensational as it is because of the creator – John Loughborough Pearson. He decided to make it gothic because in the Victorian times it was very fashionable.

It was a marvellous afternoon at the cathedral, but sadly it was time to leave and say goodbye. As we left the cathedral I could see the beaming sunshine reflecting off the stained glass windows, this really was a splendid day!” (Rosenwyn – Kittiwakes) 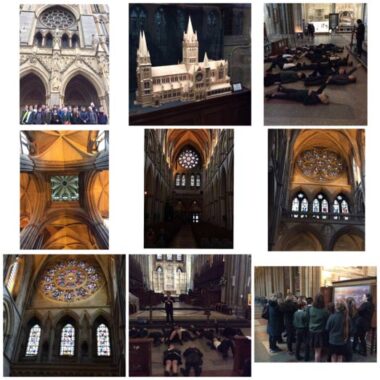