Thank you for the grant to fund our bus for our school trip to the Royal Cornwall Museum to do the Stone Age to Iron Age workshop.

The children had a fascinating time and enjoyed being able to handle the artefacts and make their own coil pot.

“First of all we looked at Stone Age artefacts.  I liked the sword because if you turned it around, the top looks like a person. I also liked the bow and arrow because the bow was giant and the arrow had two little barbs on the end. In the Iron Age, I learned that they wore their hair in spikes. We also looked at sheep wool, animal teeth and an axe. We also looked at other artefacts like a scythe and a polished metal mirror from the Iron Age. We learnt that there are no more trees on Bodmin Moor because farmers chopped down some of the trees space to plant crops and keep their animals. Also there are no longer any trees on Bodmin Moor due to Climate Change.  ”

“Yesterday we went to the Truro Museum.

We learnt about pots. In the Stone Age the pots didn’t have any patterns on them and they all had round bottoms. This is because they hung them up and put berries and nuts in them. Later on, in the Iron Age, the pots had flat bottoms so they could put them on the ground and on the fire.”

“Yesterday we went to the Royal Cornwall Museum to learn about the Stone Age, Iron Age and Bronze Age. I learnt about clay pots and why they had patterns on them. They used patterns on them because the Iron Age people would know which one was theirs. The Stone Age people had a flat bottom because they might have hung them up or they might have put berries in them. We then made our own coil clay pot. I made a stripy diagonal pot made out of clay. I enjoyed putting on my patterns and smoothing out the clay.”

“Yesterday I went to the Royal Cornwall museum in Truro.

First of all, I looked at the Stone age artefacts and I learnt a lot of things. There was a massive bow and arrow because the bigger the bow the further the arrow will go. The people would want the arrow to go further because they wouldn’t want to get too close to their prey in case it was dangerous. There was a sharp piece of flint that looks like a piece of fudge. I enjoyed looking at the deer’s antlers and how we had to guess what kind of glue they used on them. I was fascinated that they used tree sap as glue. In the Iron Age they created a mirror and the reflection is how you looked if you looked at yourself in water. I learned that in the Iron Age they spiked their hair up with a comb made out of a cow’s shin. We also learnt that there aren’t very many trees on Bodmin Moor anymore because of the climate change.” 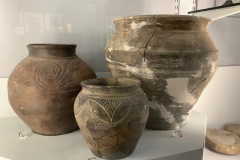 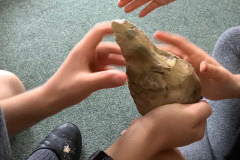 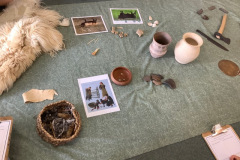 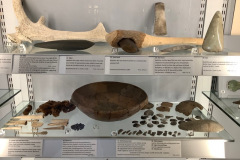 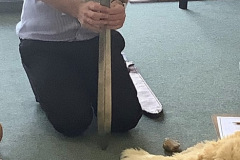 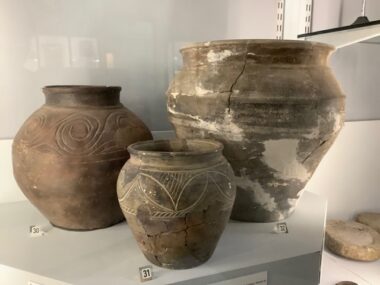