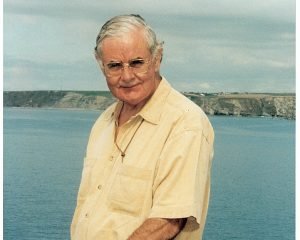 Sir Richard Trant was a Cornishman of extraordinary talents. After a very distinguished career in the Army he retired to his beloved Cornwall and dedicated his remaining years helping to promote Cornwall’s heritage both in Cornwall and much further afield.

Cornwall Heritage Trust makes this prestigious annual award to an ‘unsung hero or heroine’ – who has made a significant contribution to Cornwall’s heritage. It is open to all organisations in the heritage field to nominate a suitable candidate.

Each nomination is supported by 2 or 3 letters of recommendation outlining the nominee’s outstanding contribution to the preservation and promotion of Cornwall’s heritage. Letters of support can be provided from people with first-hand knowledge of the nominee who can endorse their contribution or supply additional information.

For services to the preservation and revival of Cornish gigs.

For his research and practical work on Cornish crosses.

For his work with the Cornish Buildings Group and for many years of dedicated organisation and promotion of the Duke of Cornwall’s Light Infantry museum.

For research into Cornwall’s maritime history.

For his work on religious nonconformity in Cornwall.

For restoring Carwynnen Quoit and inspiring the local community to help preserve their heritage.

For his work creating and preserving an archive of interviews and recordings of stories from a career spanning over 50 years, as well as his contribution to Cornish Gig Rowing and his tireless work as Advocate of Cornish social and cultural heritage.

For his work with the National Maritime Museum Cornwall and the Bartlett Library.

For establishing and organising the Cornwall Association of Local Historians (CALH) as well as presenting talks and tours all over Cornwall.

For her work with CASPN, FOCAS and the Penwith Landscape Partnership Project.