Trethevy Quoit… a burial chamber from the late Neolithic period

This is a particularly well preserved “portal dolmen”, a burial chamber from the late Neolithic period.  It is one of the most impressive in Britain. This chamber tomb is dated from the Neolithic or late Stone Age, and may have been built sometime in about 3500 BC. It is sited on a promontory overlooking the confluence of streams which flow southwards to become the River Seaton; the northern skyline is dominated by Caradon Hill and granite massif of Minions Moor.

Four large upright overlapping granite slabs form the sides of the chamber with lateral stones at front and back. The back stone is leaning inwards, and the massive capstone which is supported by these uprights rests at an extreme angle. It is not clear whether it was built this way or if it has partially collapsed or slipped. A round hole has been drilled through the top corner of the capstone.

Like other portal dolmens in Cornwall, the quoit is surrounded by a stony mound or cairn which would probably have been more impressive than it is today. It is thought unlikely that the quoit would ever have been completely covered: perhaps the capstone remained just visible above the mound.

Excavations have shown that quoits such as this were constructed in the early and middle Neolithic period between 3700-3300 BC. They were used over long periods as communal tombs or ossuaries to house the bones of the ancestors.

Due to the acidity of the soil no bones have been found in Cornish quoits, but excavations of quoits in other parts of the country have turned up human bones in the chambers and pits and postholes in the forecourt area. Some quoits continued to be used into the Bronze Age for the burial of cremations placed in burial urns.

Portal Dolmens are found all over the British Isles and throughout the world. In Britain they are most common in Cornwall, Wales, Scotland and Ireland. Recent studies indicate that sites were placed carefully in the landscape in relation to hills and water, with entrances aligned towards particular horizon features or celestial events. Trethevy Quoit’s entrance faces towards the east-south-east. 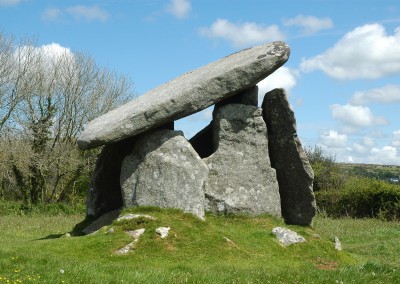 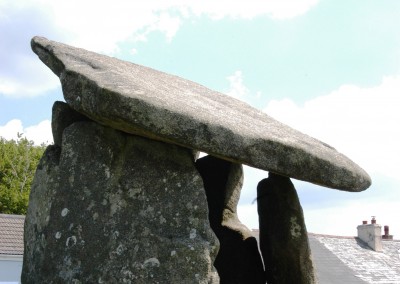 1 mile North East of St Cleer off B3254 (OS map 201; ref SX 259688) Trethevy Quoit is signposted from a small lay-by car park in the hamlet of Trethevystone, between Darite and Tremar.